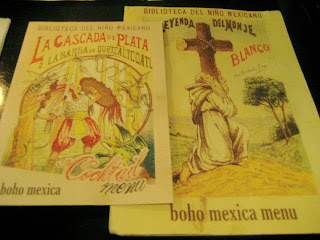 I grew up with a large, sequined sombrero hanging from my bedroom wall. It was at least 15 times bigger than my head at the time, and I took much pride in anointing it to the heads of my visiting 7 year old guests - if worthy. Now, I only wear it on weekends.

But, perhaps because of my early associations with the sombrero, Doritos and The Three Amigos, I have this pervading sense that I am meant to like Mexican food. I can chomp my way across a cob of corn like it's going out of style. I gorge wholeheartedly on chillies and spice. Mexican food essentially holds all the promise of exotic comfort food. Salsa me up, amigo.

So why can I not find any decent Mexican restaurants?

I fully anticipated that Boho Mexica was going to be the turning point in my Mexican dining experience. A place that would do away with the cheesy, Tex Mex slodge, lay my tacky sombrero to rest, and lift London's Mexican dining scene to a whole new level.

And so it was that I and my 6 food loving accomplices came to be drinking salty margaritas and chilly beers at Boho Mexica one rainy evening in London this week. As eager as me to enjoy the feast were L & L of the Humble Kitchen fame, Susie, The Peanut Gallery, and newly engaged lovebirds Emma and Andrew.

The surrounding mood of the room is upbeat, if a little less raucous than expected. I like the boho look - original Mexican newspapers and sepia posters from the 1930's and '50s line the walls, and the overall character suggests there will be joyful howls of "arriba!" if the place ever cranks up. Unfortunately, it never gets close.

Perhaps head chef, Aunt Patty, was not in the house. But as plate after plate of sloppy, tasteless secretions were paraded out to the table, my expectations sunk increasingly lower.

We started off with several serves of the Guacamole Tia Patty with home made tortilla chips. The guacamole was lovely, although the mean little serves of tortilla chips were not enough to dig up even half of it. TPG resorted to a surreptitious use of his fingers. 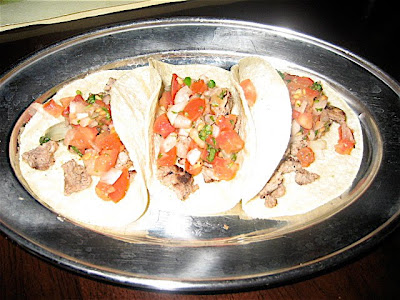 I was expecting these to be tiny, so their miniscule proportions were no surprise. Mostly, the tacos were quite nice, in a mundane sort of a way, although the steak was fairly flavourless and chewy. Their unsatisfying nature was due more to the complete lack of oomph than the fact that we needed so many plates of them to get anywhere near satiating our hunger. 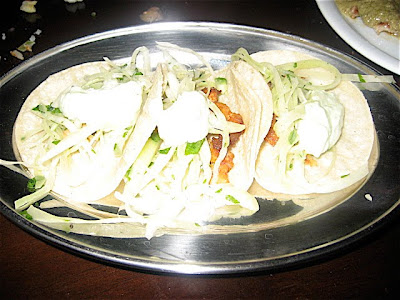 Next came several plates of Empanadas de Flor de Calabaza - a twin set of hand made Mexican turnovers filled with zucchini flower and cheese, and topped with green salsa. These simple Mexican style pasties were the best dish of the night. From here, it was all sadly downhill.

Enter the Enchiladas del Mole - chicken drowned in a hefty discharge of chocolate and chilli sauce, a smattering of sesame seeds, with herb rice on the side. This is a dish with a face that only a mother could love. There is no need for me to reminisce here about days gone by spent trudging through cow paddocks - I'll let the photo do the talking. Who knows what the sacrificial chicken tasted like? The sauce completely overpowered the dish, tasting overbearingly of licorice; it possibly ruined our taste buds for the rest of the meal. The rice was dried out and flaky. 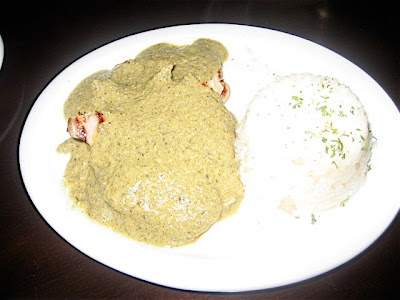 Next came the mystery meat course. Pipian Verde was (apparently, according to the menu) pork tenderloin in a pre-Hispanic herb sauce. Once again, with so much sauce (of unknown herbal variety) and bland meat, just what we were eating was anyone's guess. 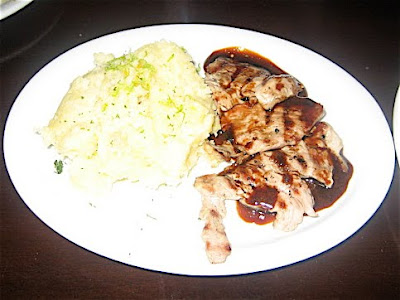 The Puerco a la Jamaica was pork tenderloin in a "secret Hibiscus flower sauce" with corn mash. I remember being thankful for the mash. The pork was among the better of the meat dishes, but hardly rates as more than a vague recollection. 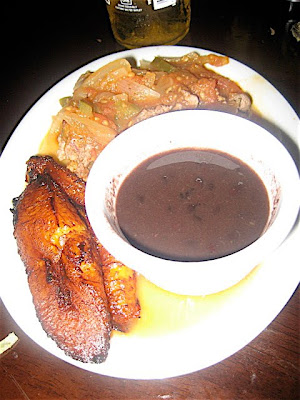 The now familiar feeling of discontent again swept over with the Bistec a la Mexicana. It consisted of little strips of rump steak in tomato herb sauce, with unremarkable sides of plantains and black beans. 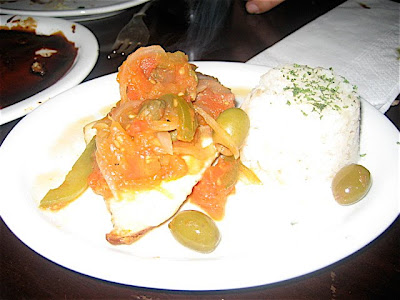 The Pezcao a la Antigua is sea bass in traditional Veracruz style sauce. Both the fish and the tomato sauce concoction were fine (although fairly humdrum) with vinegary, big green olives. 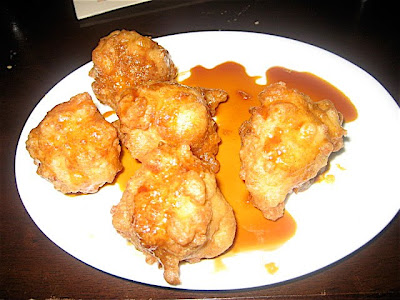 Despite the unrelenting procession of previous disappointments, we were looking forward to our 3 plates of Bunuelos de Navidad for dessert - home made dough fritters drizzled in vanilla dark sugar cane syrup.  How could you go wrong?

Well, let me tell you. Despite looking the goods, these nuggets were completely uncooked in the middle and tasted every bit as feral as you would expect plain raw dough seeping in cooking oil to taste. Now, I normally subscribe to a view that even a bad dessert is a good dessert - but we hardly made a dent in these.

Finally, the drinks. Boho has a great cocktail list, and my margaritas were lovely and salty. Although, I must admit, I prefer my margarita served in a nice, festive martini glass, rather than a narrow little tumbler with straw. At least it was hard to go wrong with the Coronas. 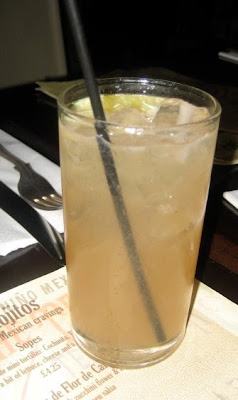 Apart from one waitress who was ok (although not overly useful on menu suggestions), service was mostly disinterested and brusque, bordering on rude. Given the immense number of plates and drinks we had ordered, it was also slightly odd to be prompted to leave to make way for other diners as we were still trying to fight the regurgitation of the last piece of dough not-quite-frittered. (Particularly as we had not given any indication of how dire the food and service had been.) We were not told of a time limitation when we made our reservation.

While each dish is quite cheap, ranging from around £3.00 - £5.50, I have rarely eaten so many dishes for so little satisfaction, and by the time they mount up to £33 per head (with drinks), I can think of many better places to spend my hard earned.

Boho Mexica feels like a great opportunity lost. I don't know if I'm giving up on Mexican fare entirely at this point, or whether I should just keep on plugging away for the right destination. But I do know one thing - it's adios for you and me, Boho.