The Duke of Wellington - Marylebone, London 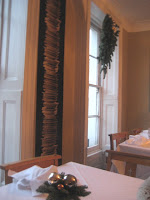 It's been a while since I've dined at the Duke. My lasting memory from my previous visit is of a fellow guest, a usually sane and extremely law abiding citizen, telling a Seinfeld-esque tale of skulduggery and grand larceny involving him, a dry cleaner and at least 1 pair of lost trousers. I can't for the life of me remember what I ate - but I remember it was good.

This time, I'm on the ball. Our group of six settled into the upstairs dining room, which is a lovely enough space with the semblance of a proper, grown up sitting room - intimate setting, white walls, dark floorboards, big breezy windows. So perhaps it's down to my juvenile and unsophisticated nature that I'm always slightly reluctant to leave the cheery downstairs pub behind - it's also a lovely place to eat. 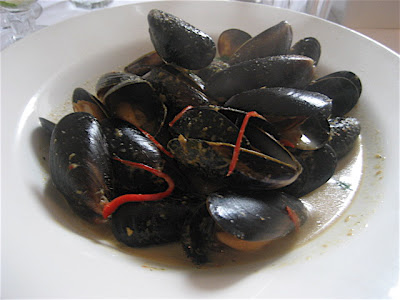 I was, for once, avoiding the meatier dishes in preparation for the Christmas feast awaiting me later that evening. So, I settled on the mussels in a light, soupy Thai green curry with a side of pilaf. Alright, alright, I hear the gasps. I never order Thai curry in a pub, nor even mussels for that matter. However, this version was enjoyable - and would have been even more so had I been given a spoon to get at the lovely soup. Instead, I resorted to the scoop by shell method. Classy. 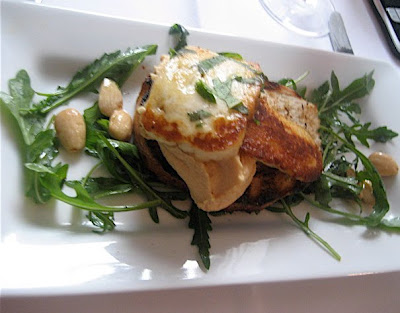 The grilled haloumi was a popular choice with the ladies - a salad with toasted almonds, rocket, hummus and grilled bread. As much as I adore haloumi, it has to be cooked well and eaten in a timely fashion to avoid the rubber tyre effect. It seemed to pass the tyre test with flying colours and gained the full approval of the girls who nodded and devoured and attacked it wholeheartedly. 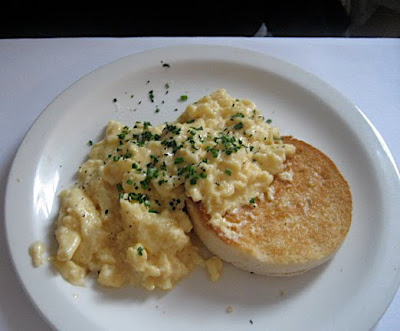 The Peanut Gallery opted for the rather plain looking scrambled eggs - perhaps one too many fandangled protein shakes that morn, TPG? But he was happy enough with his choice.

Our sides of spinach and long, knobbly new potatoes were all cooked well, and as satisfactory as such sides could be. I certainly hopped in for my 3rd side of carbs (rice, bread and potato - mmm...). The bread was hot and fresh from the oven - always earning a big tick on the Greedy Diva checklist. 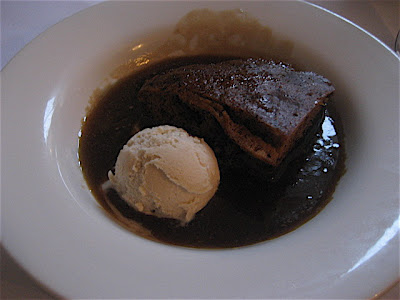 Desserts were fab. I had my heart set on the apple crumble but it was, to my dismay, sold out by the time we got around to ordering. However, the sticky toffee pud with banana ice cream was a solid wingman, ready to step up to the plate. The sauce was delectable, the pud rich and moist, and it was happily generous in size. The ice-cream was disappointingly icy but, all round, it earned a big thumbs up from me and Mands (we had one each, of course). 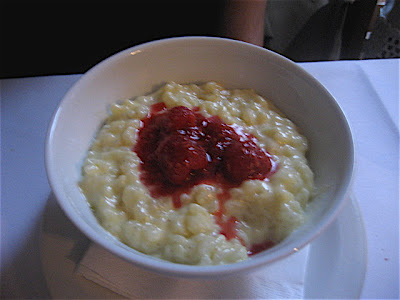 The Peanut Gallery's rice pudding with raspberry compote was lovely and creamy, and I liked the bitter sweet tang of the fruit - although he, of course, thought it superfluous. Don't put expendables between TPG and his pudding.

The Duke of Wellington is a lovely place to eat fine pub fare. What it does, it does well, as recognised by its Time Out Award in 2008 for the Best New Gastropub. Go lofty upstairs for a reliably good meal with friends, or nestle in downstairs for a relaxed and lazy afternoon pint, watching the rain fall over the quiet streets of Marylebone.