It's beginning to feel a lot like..... an Australian Christmas 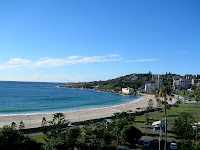 I'm heading back to my home country in only 3 sleeps. Bring it on! The street lights will be laden with snowflake decorations, every window blinking with a twinkling green pine tree and the entire country will be putting on a brave simulation of the North Pole in a blizzard. It will be 40 degrees Celsius in the shade.

Ahh, I LOVE an Australian Christmas.

Christmas Day, in the Greedy family, is awwwwll about the food - celebrating with it, worshipping it, sharing it (although don't try me if it comes down to the last slice of pav), and, presumably, trying to induce a heart attack with it. 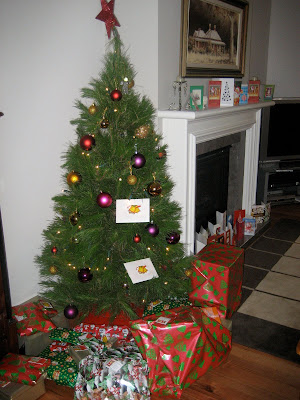 Sure, presents provided a minor distraction in the younger years for me and Little Sis. We'd be up like clockwork at 5am on Christmas Day to clamber over my sleeping parents shrieking "Father Christmas has been!" while tugging at the corners of the duvet. To their eternal credit, they never once slapped us over the ears and sent us back to bed until an appropriate hour. En masse, we would migrate to the family room - where our resplendent (usually plastic, but these days real) Christmas tree would be holding court - to inspect the goods.

Since I had cottoned on to the secret about Father Christmas at the age of 5 (I will never forgive that little she-devil next door - the witch also called me "freckle face"), I already knew it was Dad scoffing the beer and carrots we left for FC and Rudolph, Dancer, Prancer etc the night before. From my position behind Little Sis, I'd give him a knowing nod acknowledging another fine act of wily subterfuge. Obviously, he had no idea what I was on about. But I clearly reveled in being an insider on the conspiracy more than enough to compensate for the premature revelation of childhood's last great secret. And it also gave me an opportunity to sneak around in cupboards trying to get an early peek at the loot.

But once the last ripping of paper was done, the final shrieks of delight at FC's mind-reading genius had subdued, and the furtive sideways comparisons of respective booties was over (bigger was always better), it was on to the main event. The food.

Christmas Day has never been just about our fabulous foursome. Oooohh no. Soon the entire extended family - about 30 grandparents, uncles, aunties, cousins, boyfriends, girlfriends, friends, kids, babies, dogs, leave the cats at home - would be descending upon us bearing arms full of plates, platters and bowls overloaded and heaving with glistening culinary delights. 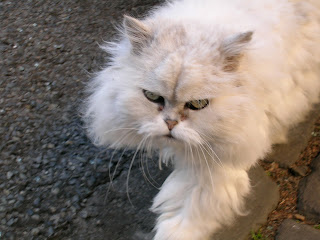 Mum, of course, would have been planning dishes for weeks and her carefully outlined attack on the day will begin early with whatever mixing, whirling, baking, stirring, chopping and roasting needs to be launched into action first.

There'll be no civilised sitting around of any dining room tables, pondering life's pleasantries while eating hot roast turkey and trimmings in my fam. Uh uh. It's hot outside. It's hot inside. And they're all mad. So there'll be a huge table spread with every possible food bearing any tenuous link to Christmas - and there'll be grabbing, pouring, loading, scoffing and strategic positioning to maximise gains per serving.

Not that there's not enough to go around - each person contributes enough to go around for the entire group twice, with the end result that everyone takes home a doggy truckload of a bit of everything, which is only about 1/3 smaller than what they came in with.

There'll be roast turkeys, chickens and hams aplenty, all cooked that morning and cooled down by lunchtime to serve "summer style". There'll be gigantic cheese plates and Glen's amazing seafood platter, bursting with prawns, smoked salmon and oysters. Mum's infamous layered garden salad will make its annual appearance (I'll be eyeing it off as my strategic starting point around the table), and various delicious potato salads, rice salads and everything you can possibly imagine salads will be up for grabs.

Having downed a couple of tumblers of Mum's thick extra brandy eggnog over breakfast, lunch service will officially start at 12pm and continue without interruption until about 3pm when the dessert spreads will take over - Mum's cheese cake, the traditional Christmas pavlova, an attempted replication of Kaye's ever-amazing fruit salad (my first introduction to the lychee) and Gran's Christmas pud with brandy cream. For the latter, think 8 parts brandy to 2 parts cream. Hap-py days! 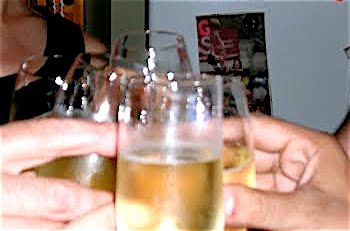 The original savoury dishes will then go back out to the table, intermingled with the sweets - just in case anyone feels a bit peckish in the late afternoon.

We'll drink beers and prosecco while watching Dad and the Uncles take on the kids at back yard cricket (with all the ferocity and competitiveness of professionals playing for Australia), while Martha the dog narrowly avoids concussion as she chases 4's and 6's around the yard. 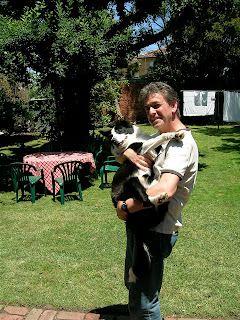 And eventually, as the sun starts to set, all will make their way home, giant doggy bags in hand, to polish off the leftovers for the next 2 days in between BBQs and cricket tests. I can feel the top button popping already. 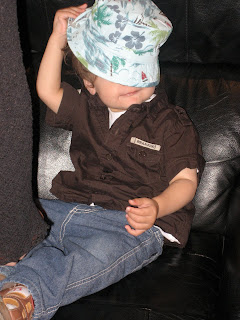