Bill Buford, in his account of his adventures as Chef Mario Batali's kitchen slave, says people go to Babbo "in the expectation of excess". He ponders Batali's enterprise of "stimulating outrageous appetites (whatever they might be) and satisfying them intensely (by whatever means)". 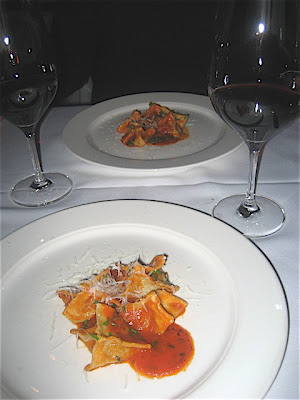 Now, I'm known to be partial to a bowl of pasta. So you can only imagine my ecstasy at the sight of Babbo's 8 course pasta tasting menu with matching reserve wines - 6 bowls of pasta, 2 desserts, 8 delectable wines and, 3 hours later, one very humorous stumble home.

But let me take you back a step. Batali's Babbo is tucked away discretely in a leafy street of Greenwich Village, near Washington Square. Outside, all is quiet and respectable. Open the front door, and be swept up into a celebratory bustle of lively fine dining with the crotch-rock riffs of Led Zeppelin smoldering over the front bar ablaze.

This is a restaurant with personality.

The Peanut Gallery and I perched ourselves up at the bar for a pre-dinner Aperol, and a blatant perve at the fare around us. Next door, a bowl of pappardelle with butter, parmesan and lashings of white truffle was showing some leg. The truffle was grated flirtatiously at the table, while its 2 recipient (and presumably flush) diners watched the bar girl coo desirously over their raunchy $300 bottle of Barolo being decanted on the side lines. TPG tried to make friends, to no avail.

But soon it was onwards and upwards to the beautiful, white upstairs dining room for the main event.

Having trained under Marco Pierre White, Batali reportedly has a fierce aversion to kitchen tantrums and all things French. He forbids the use of reduced sauces and all stock other than chicken. His passion is for simple, traditional Italian food. Just add a pinch of Batali flair.

There's so much more on the menu than just pasta (although, do yourself a favour...). There's a traditional tasting menu ($75), and countless number of sure to be ravishing a la carte options. Both the food and atmosphere are lusty and exuberant; and Babbo was bestowed with an easily deserved 3 stars from Ruth Reichl at the New York Times soon after it opened in 1998.

Batali's pasta philosophy is that "it's about the pasta, not the sauce". All his pasta pieces are beautifully hand made and cooked to perfection.

We started with the black tagliatelle with parsnips and pancetta - light and delicate in a butter and wine sauce. It was matched beautifully with a Gerwurtztraminer, Kuenhof 2007 (Alto Adige). 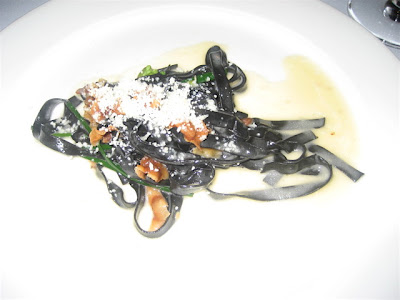 The Casunzei with poppy seeds were gorgeous Northern Italy style bundles of pasta stuffed with lustrous, sweet beetroot, potato and ricotta which spilled out in shocking brightness on first bite. They were paired with a lovely Trebbiano D'Abruzzo, Emidio Pepe 2004 (Abruzzi) which the TPG helpfully cried out "tastes like Chicken Twisties". In case of doubt, this is the highest of compliments in TPG's repertoire. 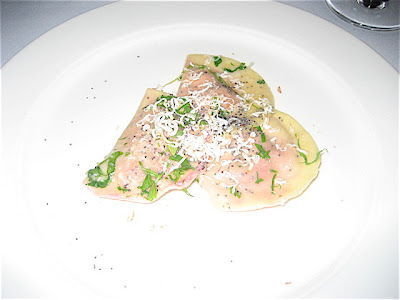 The Garganelli with Funghi Trifolati was absolutely delicious - gorgeous mushrooms, fresh parsley, a light sauce and, of course, fabulous rolls of fresh pasta. All swilled happily with a robust Barolo, Borgogno 2004 (Piemonte) from a magnum - phwoar! 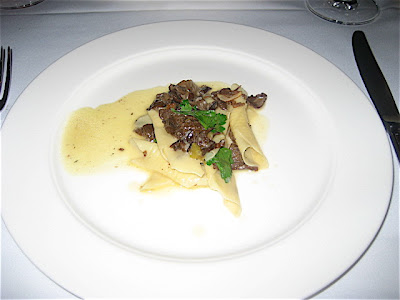 Domingo's Pyramids with Passato di Pomodoro, firm pasta pyramids filled with delectable braised beef, doubled up nicely with the Fontalloro, Fattoria di Delsina 1993 (Toscana). Again, showing that wine tasting course was money well spent, TPG likened the wine to the Green Tomato Bloody Marys at Jane which we sampled the year before - and, I have to admit, the man had a point. 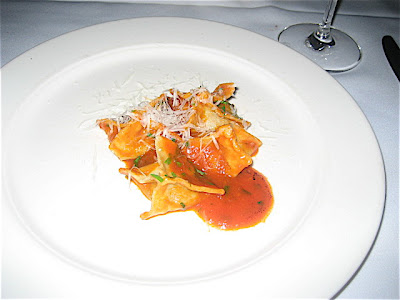 Of course, by now, our beloved (and exceptionally lovely) sommelier had already filled us up with 4 glasses of wine each - and we still had 4 to go. Each glass was carefully selected and passionately explained. Glasses were filled generously and evenly (no smaller serves for the womanfolk, a Greedy Diva pet peeve). So life was getting better by the minute at this point - each dish became more awe inspiring, each amorous moment more enamored, each joke more hilarious and each mutual congratulations at finding ourselves here with the food of the gods more flushed. 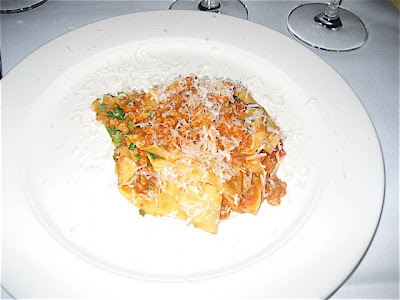 Buford tells how Batali retreated to the small northern Italian town, Porretta Terme, in 1989, where he gained hands on experience at hand making pasta and traditional sauces. He learned to make Bolognese with veal, pork, beef and pancetta, cooked slowly with olive oil and butter. Leave in the fat, add white wine, milk and a little tomato paste. All, I imagine, while staring over the peacefulls hills and valleys from Florence to Bologna.

Once again, the pasta was perfectly firm as it layered and flipped around the sweet, rich and luxurious sauce. Buttery goodness. A "sit back, close your eyes, and picture the olive groves" moment...

Next, out came jigging the Dancing Ewe Caciotta Fritters with Honey and Thyme and an Erpacrife, Scarzello 2006 (Piemonte). The crunchy exterior encased a gorgeous, gooey but fairly mild cheese, balanced beautifully with the sweetness of the honey. 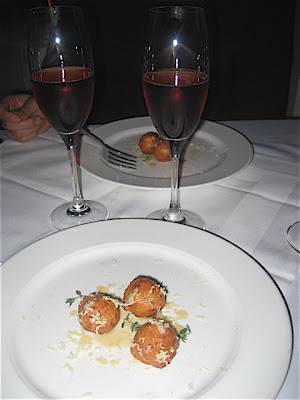 The spicy Chocolate al Diavolo was our transitionary course between savouries and sweets, and we saddled it up with the Sagrantino di Montefalco Passito, Bea 2003 (Umbria). 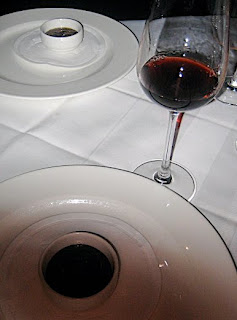 The desserts were our only disappointments with the night (not that we needed more food by now). We sampled the Tyrolean Carrot and Poppyseed Cake with Olive Oil and Orange Gelato (average) and a Pistachio Chocolate Semifreddo (which I really liked, but TPG was not fussed - all the more for me). Both were paired with the Moscadeddu, Dettori, 2005 (Sardinia). 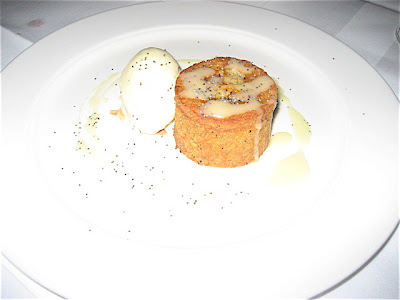 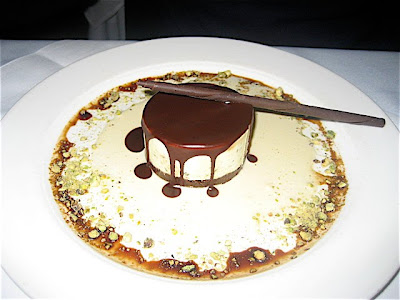 Babbo was simply sensational. The flavours and textures were wonderful, the service and ambience was attentive and fun. We paid $69 each for the tasting menu and $95 for the reserve wine pairings (our special occasion luxury) - although the traditional wine pairings are less at $50. However, we'd love to come back for a simple bowl of pasta at the bar which wouldn't break anyone's wallet. Book ahead.

So, that was our magnificent Babbo carb fest. Some other time, I'll tell you about the stumble home... 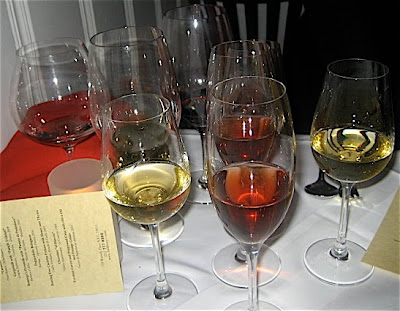 (Bill Buford quotes from "Heat: An Amateur's Adventures as Kitchen Slave, Line Cook, Pasta-maker and Apprentice to a Butcher in Tuscany", Bill Buford, 2007)