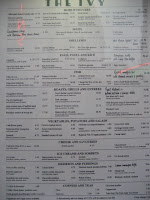 It's cold and wintry outside, and darkness falls like an old man's sleeping mask by 4pm. It's time to get warm and comfy. You could pop your woolly socks on and tuck into a bowl of soup on the couch. Or, if your mind is straying further afield, kick off the furry slippers and wrap yourself up in the comforting glow of The Ivy.

Helen is cruelly abandoning her London besties to head back to the sunny shores of Australia. So The Ivy was one London institution that needed to be ticked off before she is to be allowed on the plane. A girls' day lunch was promptly instituted and Amanda, Suzi, Lisa and I were the happy co-conspirators.

Despite its notoriety as a hang out for celebs (we didn't see any, despite my head swivelling attempts), The Ivy serves up comfort food for those after a Shepherd's pie with a sense of occassion on the side. Suzi later described it as "a big, warm, comfy blanket of a place", but perhaps a blanket you have booked so far in advance that you feel the need to glam up in your Sunday best before snuggling in. You certainly feel closeted away in its cosy coves behind the secretive and beautiful stained glass windows, as The Ivy wraps you in its arms and waltzes you away....

Much to my delight, there was a distinct smell of "Four n Twenty" in the air which had me frothing at the mouth as we took our seats. (For non Aussie bogans, a "Four 'n Twenty" is a distinct brand of meat pie sold in Australia - largely at football matches - which must be eaten with loads of Heinz tomato sauced mushed into the meat along with the roof of the pie - although others may disagree as to how to eat one, they would most definitely be wrong.)

After some warm up peach bellinis, we ordered our starters. The crab bisque with Armagnac (for me) was rich and warming, with lovely, chunky shreds of crab throughout. 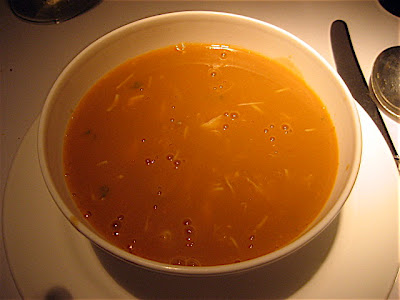 Helen's grilled squid, chorizo and parsley salad with preserved lemon looked terrific and Amanda and Lisa both started with the chicory, pear and beetroot salad with pumpkin crisps which was fresh and colourful. All were happy with their selections. 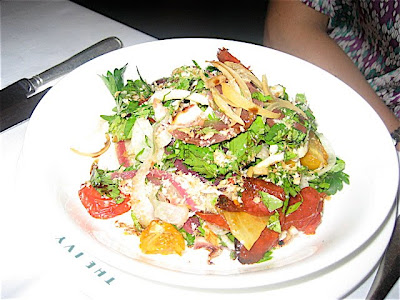 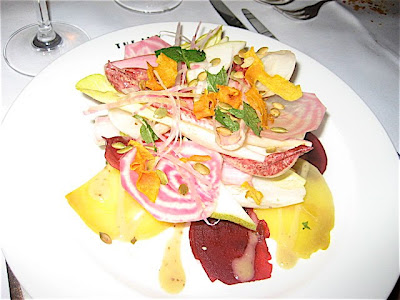 The only mild disappointment was Suzi's gem heart salad with blue cheese and toasted walnuts. I frequent a beloved cafe in Melbourne (France-Soir) which serves up the most perfect version of this salad: a whole, full lettuce in a bowl, scattered with hearty chunks of delectable blue cheese (and the French chardy on the menu is an amazing match). Unless Suzi comments otherwise, I believe her Ivy version tasted fine (not marvellous), however it was presented like something I might come up with from the left overs in my fridge - a slightly boring scattering of lettuce leaves with the odd bit of shredded cheese. Lift, Ivy, lift. 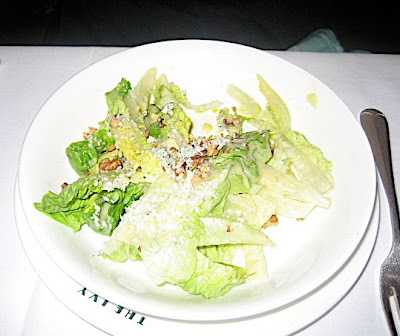 Oh hoh, lift it did.

For my main course, I opted for The Ivy's signature dish - Shepherd's pie. Oh yeahh. Gorgeously presented, rich minced lamb topped with billowing clouds of mash, just perfectly crisp around the edges. (No, I did not ask for tomato sauce. Yes, the thought did cross my mind.) A hugely satisfying dish - Loved it! 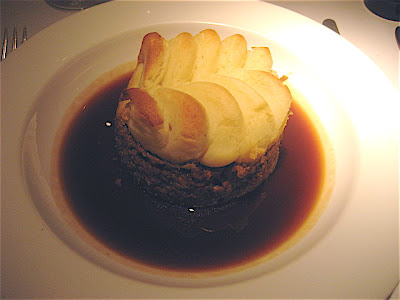 Another classic stalwart of the Ivy is the salmon fishcake with sauteed spinach and sorrel sauce - Suzi lovingly devoured it with glee. 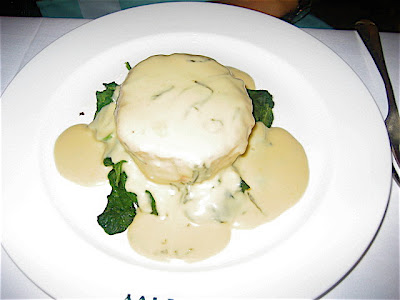 The fish of the day was a chargrilled plaice with mushrooms and artichoke puree. A lovely wintery, "meaty" fish dish. Helen and Amanda seemed delighted to scoff it (daintily of course) and almost lick their plates clean. Amanda thought it was only missing a bit of greenery. Fair call. 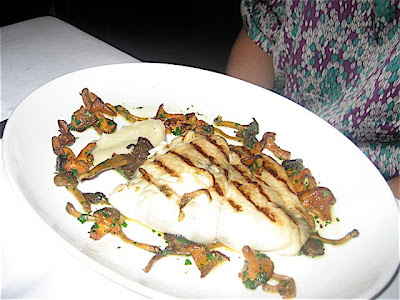 Our resident vegetarian, Lisa, opted for the exotic bang bang vegetables with peanut butter sauce, which she also liked - and the bang bang chicken is also a popular dish here. 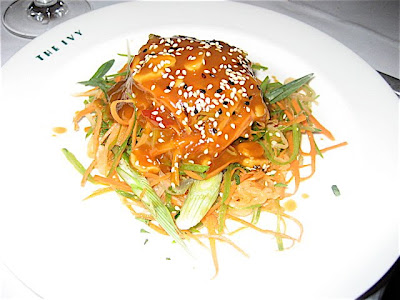 Of course, it wouldn't be a fine ladies' lunch without a selection of seductive desserts swilled down with some super sweet black muscat. We shared two puds. First, the Scandinavian iced berries with hot white chocolate sauce (delicious, especially the sauce, but the larger berries tasted like they were straight from a pack in the freezer which had not been properly defrosted - a bit off-putting). 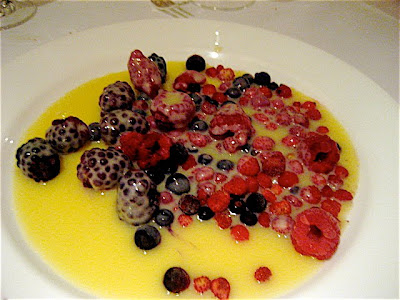 We also shared a pineapple meringue number in a martini glass - ok, but a little less cream and a lot more meringue would have gone a long way to winning me over. 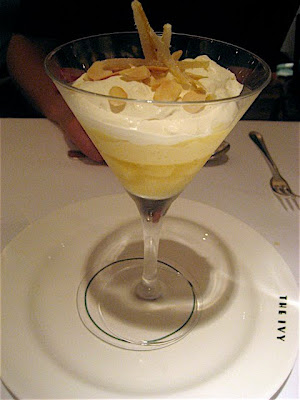 But the grand temptress of them all would have to be the Baked Alaska (for 2). We watched rapturously as other tables treated themselves to a beautiful bomb of meringue and ice-cream, served with grillote cherries, and flambed in rum as a visual spectacular before our eyes. It was hard to stay focussed on our pineapple.

So, I'm not the lone ranger in adoring The Ivy. Not everything we ordered was spot on - however, it doesn't go too far wrong and most dishes were delectably good. My advice is to order the homely classics.

Service is impeccable - friendly rather than fussy. Prices are reasonable for the quality and ambience (about £55 per head for us, including 3 courses, a bottle of wine, bottle of sticky and bellinis). And after a long leisurely lunch with fabulous company, it's nice to leave in the darkness of the late afternoon, feeling pampered, cosy and thoroughly satisfied by a day well spent.