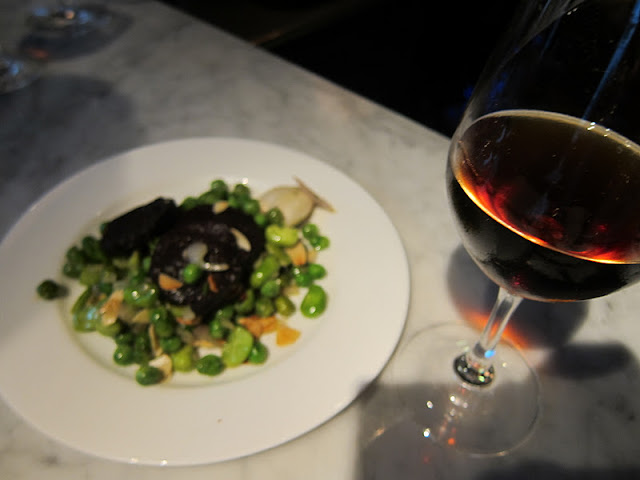 Normally, I don't like to eat standing up. However, I will put on my best ballerina flats and make an exception for Jose. As they say, tired of tapas bars, tired of life.
This is pretty much as close as it gets to your own little Madrid tapas bar in London. 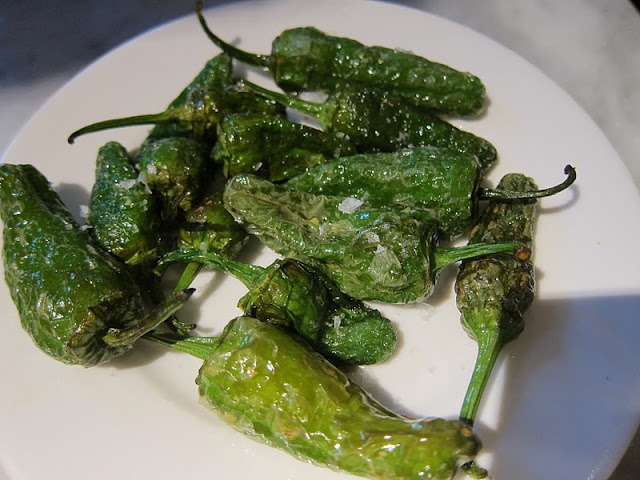 Bite into a plate full of bright green, salty Padron peppers with a side of nutty Iberico ham from an acorn fed pig, perfectly carved, wafer thin, to melt on the tongue, and wash it down with a its perfect partner - chaser of marzanilla sherry. Simple bliss. 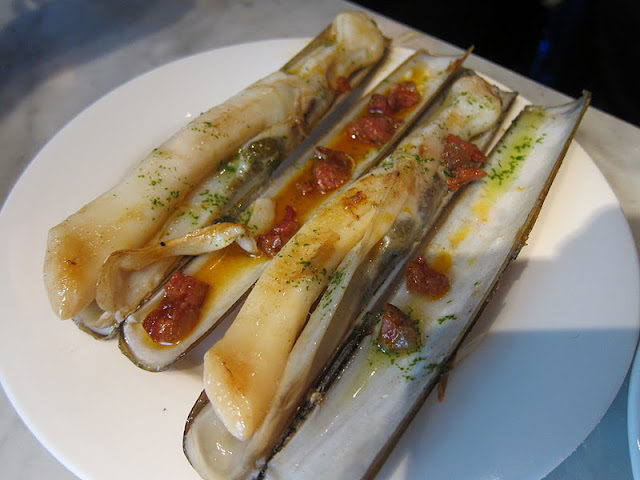 Jose Pizarro has already established himself on London's Spanish restaurant scene through his previous work at the Brindisa restaurants. Breaking off on his own with Jose in Bermondsey, this popular little gaffe is worthy of all the praise with which its being lavished. 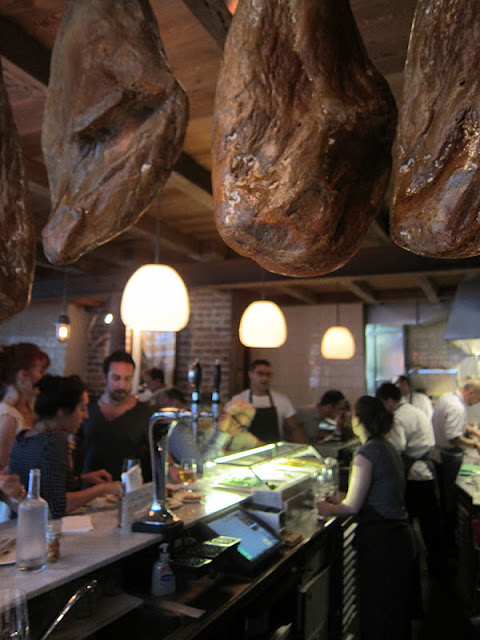 Perch up against the bar or a barrel, and work your way through the list of sherries and wines, while sampling all the lovely bits and pieces from the menu -  salty razor clams with the heady goodness of paprika laden chorizo, sea bass with blood orange, fatty blood sausage with broad beans, fresh, zingy gazpacho, or a big hearty chunk of spot on tortilla. All this at reasonable prices (with the usual small plates disclaimer - you can spend as much or as little as you want).
It's busy and crowded - and if you can handle that, its heaps of fun. Big love. You can't reserve - just turn up. 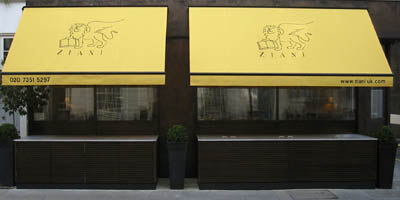 It's always the way. Four days before we leave London for good, and we are introduced to the gold nugget that is Ziani, a Venetian restaurant in Chelsea.

Our friends, Rachel and Dave, fine purveyors of the world's Italian restaurants, go there almost every week and no doubt we'd be joining them if we were going to continue living in the same hemisphere.

The room is buzzing with full tables, chatter, corks popping and flamboyant Italian waiters who greet their regulars with kisses. The warm glow of the room falls across leather banquettes, small crammed tables and picture frames scattered randomly across the walls. The place has character and then some.

I loved it immediately, but it completely won me over when the food arrived. Big plates of pasta are fairly priced - at around £10 or less for entree size (add £1 for mains). My enormous (entree) plate of perfectly cooked fettuccine alle capesante (£10.50) was loaded up with fresh scallops and large chunks of artichoke - delicious. My Saltimbocca alla Romana was gorgeous - 3 generous pieces of tender veal with the comfort of ham and sage, and a large portion of some very Robuchon-esque (ie. heart attack inducing) mash.

There's a large selection of starters, pastas, meats and fish, all of which look superb and met with serious satisfaction from me, TPG and our 2 friends. The boozy tiramisu is also not to be missed.

Ziani is in a quiet street in Chelsea, completely off the radar. With apologies to the locals, this is a new favourite GD recommendation for non fuss, delicious Italian food with a boisterously fun atmosphere to match. About £30+ per head plus drinks and service. 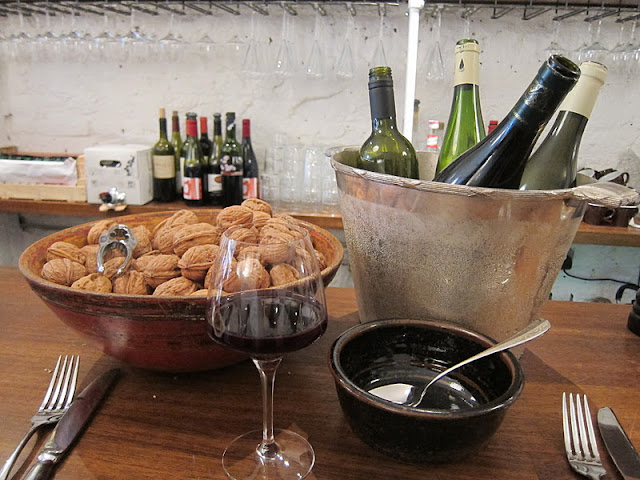 I may have left London, but I still have a few bits and pieces waiting in the wings. Starting with this...

Soho rocks. I love it. It has Koya, Fernandez & Wells (1 and 2), Mrs Marengo's salads (now at Mildred's), Bocca Di Lupo, Gelupo, Scoop, Spuntino, Polpo, Polpetto, Bob Bob Ricard, Flat White, Milk Bar, I Camisa, Byron, Yalla Yalla, The Breadman Cart, Cay Tre... the list goes on. Joel Robuchon is a mere skip away. I even like the weird coconut Bubbleology drinks up the road (never blogged, but my new addiction).

And now Soho has Ducksoup.

My first impression on entering Ducksoup is that it's exactly the sort of place I love to visit. London, indeed the world, needs more places that look like Ducksoup.

The white tiled walls are scrawled with the names of natural wines (although I like the idea, organic/natural wines still tend to disappoint me, with a few rare exceptions), there's a huge bowl of fresh walnuts on the counter for the cracking and there's a BYO vinyl policy for the turntable in the corner. It's a petite and character filled wine bar, with lots of cured meats and cheeses, small plates (£7 each) and a few larger ones (£14 each) where you can drop in and snack at the bar (love it) or chat at one of the few small tables lined against the wall. Friendly, keen staff are the icing on the cake.

I also love the daily changing menu (updated on on tumblr), which is hand scrawled on a bit of paper. It features things like slip soles, rillettes and cornichon, pumpkin with chestnut and goats curd, lardo, quail with pickled fennel and chilli and clementine, roast pork with clams and braised fennel, lamb cutlets with lemon and salt, chopped raw hanger steak, and a frito misto of langoustine, artichokes, sliced orange, sea bass and scallops. The people who run it all met while working at Mark Hix's Oyster & Chop House (which is fab, by the way). 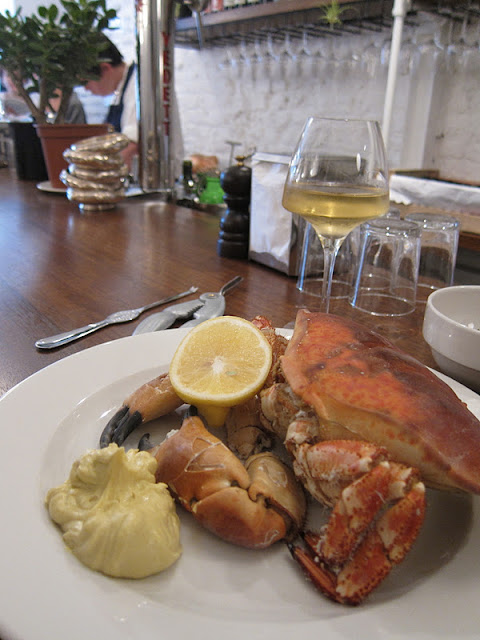 This is a menu to draw people who appreciate good food that hasn't been over fussed, enjoyed over a glass of wine that will be different to your usual tipple.

My huge pan of clams in short, noodly fideo, fino and parsley starts off with a wow factor, but the alcoholic fuminess of the sherry becomes overwhelming and it's too salty for me. If the flavours were a little less heavy handed, I would have been in heaven sopping up the plentiful juices with the highlight of the meal... the delicious, thick, crusty bread. 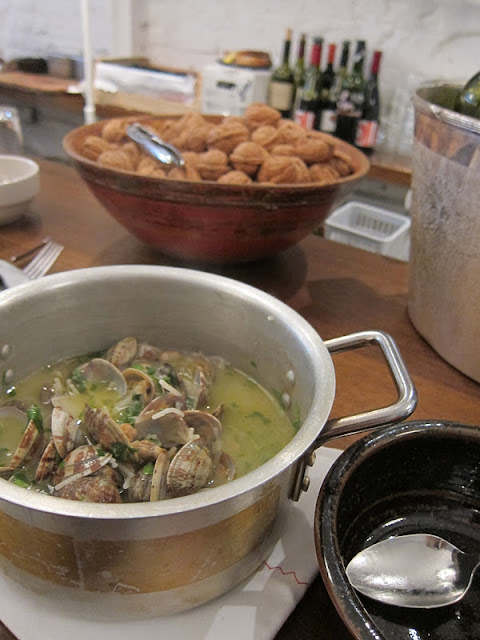 The thick mayonnaise that came with the fresh Dorset crab was also divine. The crab meat was fresh and deliciously sweet, although the small morsels of meat come at £14 which is steep, particularly when compared to the load of the good stuff you get in the crab and pomelo salad at Cay Tre up the road for £9 or the holy grail of lobster claws at Luke's Lobster In New York for around $12. (Yes, I know sourcing impacts on price etc, but I'm just saying...)

The pricing is interesting because what I love about Ducksoup is that you feel like you're nipping in for a casual quick bite in a cool Parisian wine bar, but then you end up forking out over £40 for 2 plates of food and 2 glasses of (not as good as unnatural) natural wine. So it ain't cheap, even if you feel like you're keeping it simple.

There's a no bookings policy generally, although I was able to book for a weekend lunch.

So, I like the style of Ducksoup and I have no doubt it will be a huge success, even if not everything I ate this week hit the mark. All the cool kids that line up at Spuntino will be lining up at Ducksoup soon. I think they probably are already.