Some hotels advertise their "sea views", but then you need a telescope and hawk eye vision to see the faintest dot of blue on the horizon. This is not the case when you wake up and throw open your curtains at The Scarlet.

The Scarlet is an eco-friendly hotel on the coast of Cornwall, 5 minutes drive from Watergate Bay. Perched discretely on the cliff tops above the beautiful beach of Mawgan Porth, every room comes with stunning views, big and comfy organic cotton robes and crisp white linen to assist with some serious R&R.

Even the rooftops below blend into the scene, being covered in natural grass, and tapering down to my favourite feature of all... 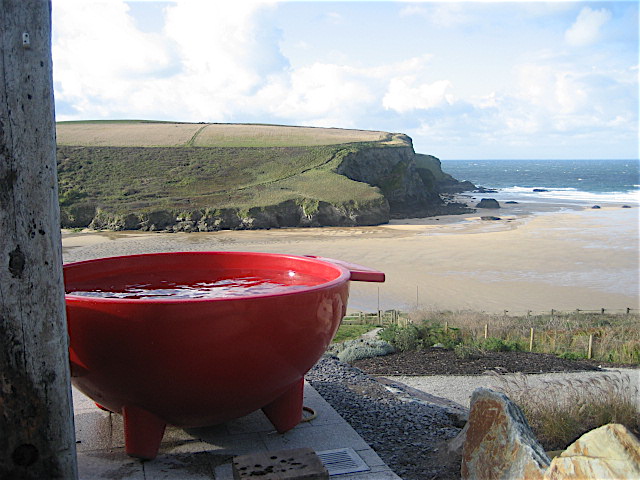 ... the big, red, saucepan shaped hot tubs on the outdoor deck. We sipped on local Camel Valley sparkling wine as our seaweed hot tub apparently worked wonders on my cellulite, metabolism and any number of diseases and disorders. I'll drink to that. Whatever its effect on my physical state, it has to be said that watching the sun set over the incoming tide from the comfort of your steaming, wood heated hot tub is the perfect antidote to a tough week at the office. (Or, as the case may be, a big day chasing down Cornish pasties along the coastline....) 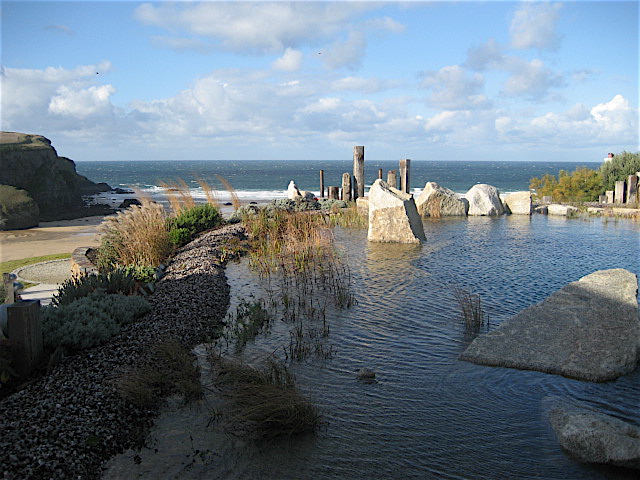 The hotel is chic, but relaxed and comfortable. The decor is mostly in natural tones and the soaps (from the Cornish Soap Box Company) smell soothing and divine. Request fresh filtered coffee or tea which is brought to your room, or escape down to the heavenly indoor pool, the invigorating aquamarine tiled oval sauna (with eucalyptus essential oils) or chill out in the relaxation room while soaking up the views. We did all of the above. Several times. There's also a spa onsite offering a range of short and long "journeys" (massages and other treatments).

Jasper the hotel dog can, to TPG's delight, be borrowed for walks on the beach. He seems to never get tired of chasing a tennis ball. Neither does Jasper.

With so much to keep you lazily occupied at the hotel, it is hard at times to tear yourself away.

Fortunately, an impressive dinner is available at the hotel's restaurant.

Chef, Ben Tunnicliffe, was head hunted to lead the kitchen after holding a Michelin star at The Abbey, in Penzance, for 8 years. Having championed seasonal, good quality, locally sourced food for a long while before it became today's catch cry, Ben sources his ingredients from local farmers and suppliers as much as possible. He describes his style at The Scarlet as determinedly "rustic" - but I say it's a stylish rustic, matching the style of the hotel in which it is housed. Each plate shows a subtle finesse that betrays the fact Ben is a Michelin starred chef who, after completing his training at Bournemouth College, went on to sharpen his skills further in top, starred restaurants in France and the UK.

But ultimately, this is food is made to be enjoyed rather than to impress the Michelin man.


To start, my pigeon with Jerusalem artichoke and pearl barley broth is excellent. It's warming and packed with hearty flavours. The pigeon is perfectly plump and rare, while the barley adds a satisfying bite. This dish converts even TPG who is not normally a pigeon fan.
He likes his own dish even more - the fillet of red mullet is thin but moist. The accompanying lemon glazed salsify is a terrific twist, while the prawns with a creamy, prawn sauce are a delectable addition. A fine dish.

My monkfish is a little chewy but has a great flavour. It's wrapped in pancetta and served with some wonderously firm, long yellow beans that retain just the right amount of crunch, parsley gnocchi, cider, mussels and thyme. It tastes every bit as good as it sounds. TPG's, rump of lamb with sweetbreads, red cabbage, parsnips and rosemary is elegantly presented, tender and rich. It's cooked perfectly. Food like this makes me happy.

For dessert, my quince crumble lacks a bit of oomph, but I love the confit orange slice with clotted cream and the chunks of warm fruit blend into the background nicely. TPG's banana, butterscotch and pecan cake is moist, warm and freshly baked with a terrific espresso sorbet which tastes to me like a rich chocolate covered cocoa bean.

We finish with a generous cheese board featuring an 18 month Montgomery cheddar, a mild Bath blue and a King's Favourite soft cheese - with sliced apples, homemade crackers and chutney.

The wine list is extensive, featuring a range of biodynamic and European wines.

Breakfasts at the hotel are also impressive - how nice to start the day with a 3 course breakfast while lapping up the coastal views. (The one downside of the restaurant for dinner at this time of year is that it's too dark to get the benefit of the views at night). We start with a basket of thick cut toast - white, brown and wholegrain - with an impressive home made raspberry jam and one of the best thick cut marmalades we've ever tasted. The home made crunchy granola is superb - nutty and knobbly, it almost borders on being biscuit-like at times. The home made muesli is also good, with lots of satisfying crunchy bits. 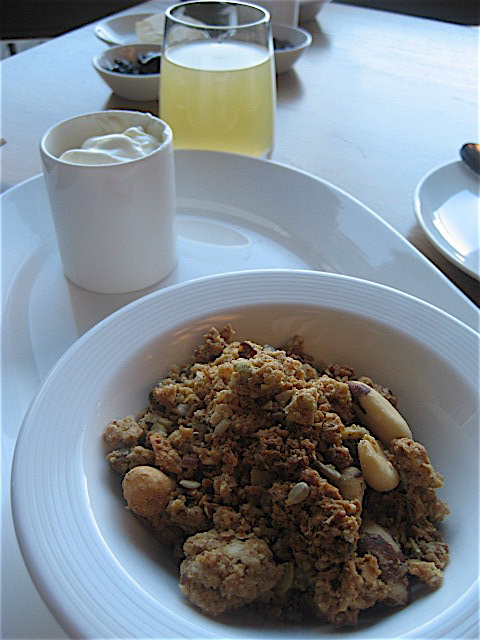 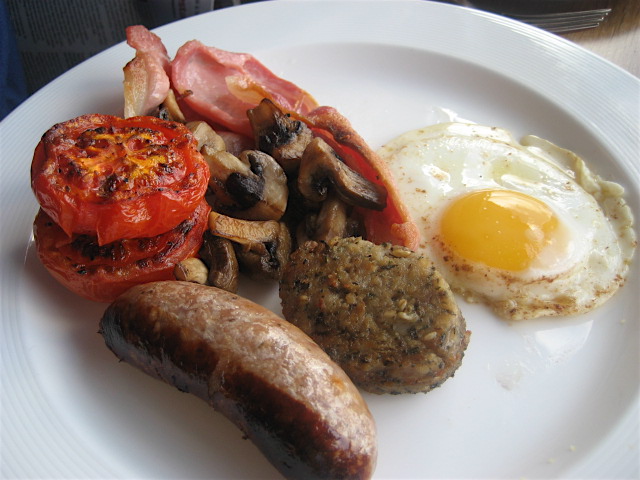 Fresh Cornish apple juice and a cafetiere of hot, aromatic filter coffee is brought to the table from the start.

I must admit to finding it quite traumatic to have to leave The Scarlet. It's a beautiful, calming place, with great food, in an invigorating environment  - the perfect countryside getaway.

Other things to do near The Scarlet:

I could easily go to The Scarlet and not leave the premises all weekend. If you do feel like venturing into the wider world, there are some breathtaking walks to be had along the adjoining cliff tops.

The hotel is a short 5 minute drive to the picturesque Watergate Bay, home to Jamie Oliver's Fifteen restaurant.


It's also a short drive to Padstow, where Rick Stein has several seafood restaurants and cafes. We tried the  casual Stein's Fish & Chips where we had some of the best battered fish we've had in years. Pull apart your haddock or cod, and watch the crisp batter fall away from the steaming hot, fleshy fish. Mushy peas were watery and disappointing and the chips were just ok. But the fish, oh the fish... There are also oysters, scallops and plenty of specials to eat in or take away. Wash down with a cider or spicy ginger beer and Bob's your uncle. (Fish & chips costs about £8.95 per serve).
Stein's Fish & Chips, South Quay, Padstow, Cornwall

We also headed about 1 hour south to the beautiful beach side town of St Ives. There we had, for morning tea, a huge, home made Cornish pasty from Pengenna Pasties. Bulging at the seams with big meaty chunks of beef, potato, swede, onion and gravy, this chest beating pasty is definitely a meal in itself (£3.25).  Recommended, although I found it slightly oversalted. While you're there, stock up on the takeaway cream tea packs - 2 huge and glorious scones (of course I tried) with jam and Cornish clotted cream for a bargainous £2.95. Eat by the sea shore.
Pengenna Pasties, 9 High Street, St Ives, TR26 1RR.

Ok, I admit it - we also stocked up on the bakery's gorgeous short breads which we nibbled in the car (along with clotted cream fudge) in between meals... 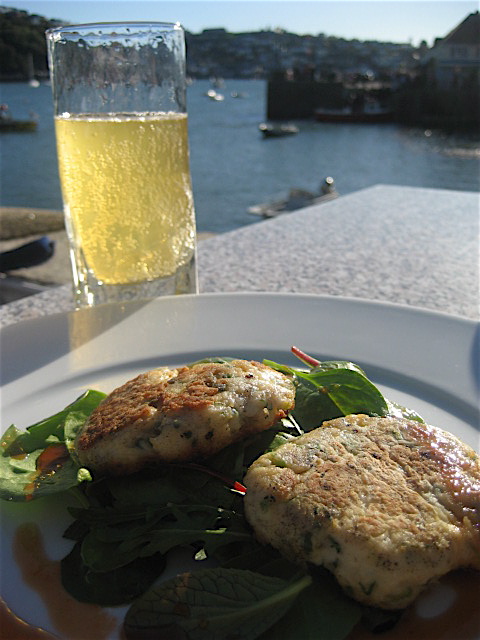 In glorious sunshine we sat outside The Old Quay House in Fowey for a late lunch one day, drinking cider with some fantastic crab cakes and crab sandwiches. 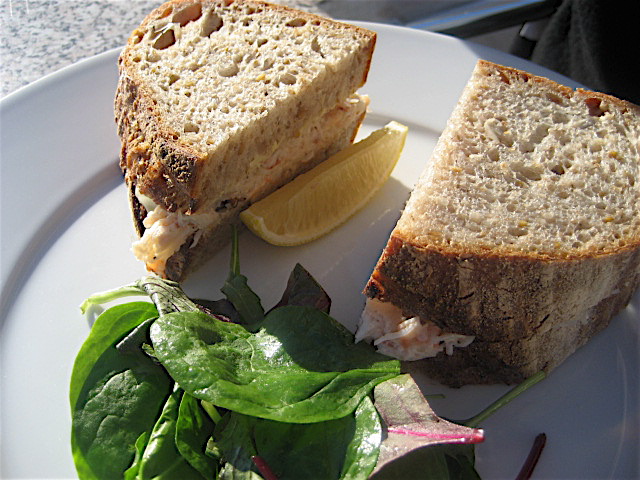 Chef Ben Bass's profile states his inspiration comes from chefs like Fergus Henderson and Thomas Keller and his ethos is to let good simple ingredients do the talking. Service was slow, but the food on the late afternoon menu was terrific (arrive before 2.30pm for the full lunch menu). Fowey has some beautiful scenery and this was a great spot to soak it up. 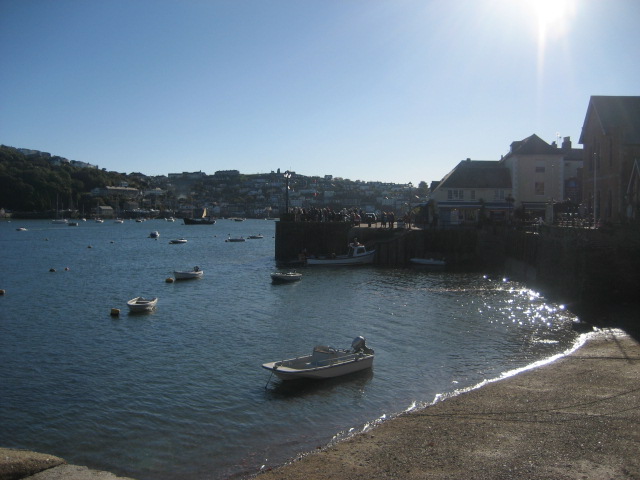 I really, really wanted to try Nathan Outlaw but the address we printed from another website was out of date and we ended up in the wrong place at the wrong time. Until the next trip....

If time is of the essence, you can take a 1 hour flight from London Gatwick to Newquay airport with Flybe for around £70 return (the airport is a 5 minute drive from The Scarlet). Trains go direct from London Paddington to Bodmin Parkway and arrive just in time for dinner. From 1 November until 22 December 2010, packages for bed and breakfast (plus dinner) in a Just Right room at The Scarlet range from £180 - £230 per night.

Greedy Diva was a guest of The Scarlet