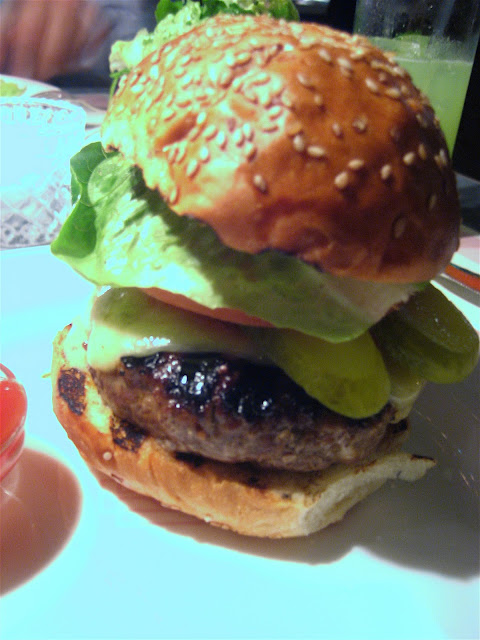 I may have already mentioned that I'm quite partial to the fabulous dining extravaganza that is Bob Bob Ricard.

BBR has recently opened its beautiful downstairs bar, Bobby's Bar, to the public and I stopped by for drinks - red booths, low lighting, fun, fun, fun. Apparently there's also to be a piano. (There's currently a special deal throughout October - 10g of caviar, blinis, sour cream and a shot of Russian Standard Original Vodka for £15.50.)


Back up in the restaurant, since my previous rant, I have fawned over the gorgeous quail egg starter, not to mention the amazing onglet which made me the best friend of every scavenger on the table (just do it).

I still need to try the lusciously pink lamb which, until now, I have only been making amorous eyes at from across the crowded room.

But it's the BBR Scotch Beef Cheeseburger that I'm having a moment about for now. I have adopted a concise new template below for occassions such as this. 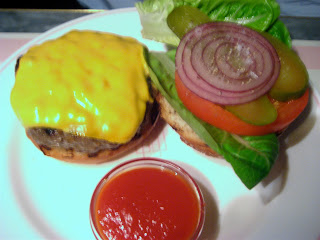 Can it hold its metaphorical head high on a plate with the most esteemed burgers in my little black (burger) book?*
* Shake Shack, Eastside Inn, Little Owl, Bar Boulud, Hawksmoor, Goodman and Byron?

9. I have to leave some room for movement.

On the juicy to dry scale?

Way up there at the gorgeously juicy end of the spectrum

Charred on the outside, pink on the inside?

Char grilled on the inside. With sesame seeds.

What else is in there with the patty?

Choice of Montgomery cheddar or Kraft cheese slice. We tried both. Lettuce, tomato, pickle, red onion come with, as does a dainty little water bowl on the side. (Or maybe we just looked messy.)

My only quibble is that I'm not sure I like having my burger served split in half as pictured.

Do I have to wait more than an hour for it?

No. It's fast. And you can sit in beautiful surrounds drinking a cocktail while you wait. (I have no problem with the cocktail - burger pairing.)

A fancy pants contender for another of London's best burgers. Highly recommended. But perhaps one for pay day.