It's been over a week since my last New York burger. I've sailed through the denial phase and now I'm starting to get the shakes and eye off McDonald's. It's a crisp Friday night. I'm tempted to start checking BA fares. My wallet groans.

But fate is shining fortuitously upon me. Byron softly opened the doors of its Soho store on Thursday and it's calling me (not literally, but I can sense it like a soft, persistent breeze in my ear). 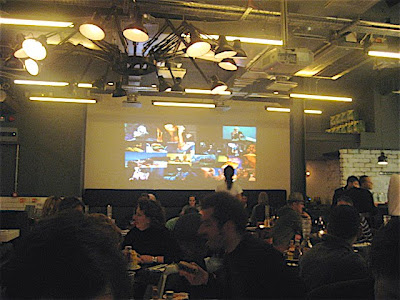 Byron has 6 other outlets around town, and there is much hotly contested debate about whether Byron or Hache offers the best burger in London within the average Jo's price range. I've sampled Hache (it's good, but not New York good), and have been holding off on Byron in anticipation of its West End opening which is dangerously convenient. Byron is blatantly keen to be known as London's best burger.

And I think they might have something there - at least in the average burger joint price bracket.

The first thing you notice about Byron is that there's cutlery on the tables. Surely not? Like Marco Pierre White, I like to get into a burger with both hands. I'm happy to cut it in half before I launch in, but that's as far as I'll go. Fortunately, Byron seems to leave way for the happy co-existence of both the civilised and the Neanderthal like approaches to burger eating. I went Neanderthal, as did many like minded patrons with a bit of grunt around me.

Byron's slogan is "Proper Burgers". The Scottish highlands beef sourced from small farms is freshly ground every morning. The burgers are cooked medium (unless you request otherwise, but why would you?) and are served with lettuce, tomato, red onion and mayo - add your own tomato sauce. The buns are plain and soft, toasted on the inside, and are apparently baked each day by a local artisan baker. Prices start at £6.25 (for the classic burger) but who has a burger without cheese - so, really, prices start at £7.25.

First impressions were that it had a bit of the New York look about it: thin, no frills, and even a chunky pickle giving a wave from the side. The Peanut Gallery and I both went for the yellow Monterey Jack cheese, but it's as yet undetermined whether the mature cheddar would have been orange in American burger style. Other cheese options were blue cheese and Gruyere. 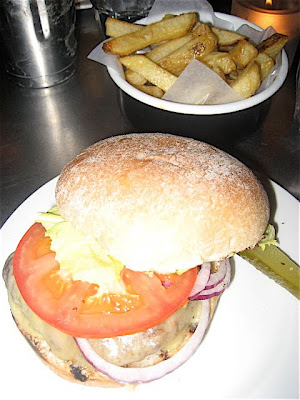 "But how did it taste??", I hear you ask. Let me answer that question with a question. How good is that first hit of chocolate at 3pm on a Friday afternoon? That first sip of coffee in the morning (alright, tea if you must) after a late night out?

This burger was good. Very good. It's perfectly juicy, pink in the middle, and the flavours are full and earthy. Personally, I prefer a slightly thicker burger, but this was on the right side of the line and, despite the cutlery setting, its size means its made to grab by the throat and hold on to. The bun was almost too plain, but TPG liked it this way and at least its not sugary and doesn't detract from the burger meat.

All the usual condiments, like Heinz ketchup and Frenchie's mustard are on the table. My only quibble would be that it's steep to ask patrons to pay extra (and £1.25 at that) for BBQ sauce.

The home made, skin on, chips were excellent, and TPG's accompanying chocolate malted milk shake was thick and delicious, without being so thick that it might induce a headache just to draw it up the straw. There's also an Oreo flavoured shake which grabbed my attention.

Service was uber friendly, enthusiastic and prompt, and because it was so close to opening night, I'll forgive them that they asked us how we were liking it after every second bite.

Byron is strangely positioned in the burger market, being just a classic burger joint really, but the decor is contriving to be a bit more upmarket and it's odd to see patrons quaffing wine with their burgers - it's more your shake or beer type fare. But in the end, the food will certainly draw me back.

All up, Byron is dangerously convenient and delicious. TPG is already talking about how healthy burgers are on a once a week basis provided we forgo the chips... the man can convince himself of anything.