Washed up from the sandy beaches of Miami, salt in the hair, a smudge of po' boy on the sleeve, what better state to rock up to New York for some late night hob nobbing among the Big Apple's swanky set. 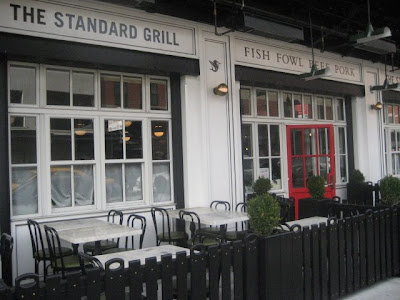 By the time we made our 10pm booking at The Standard Grill, the place was heaving. Flagship restaurant to the funky new Standard Hotel, owned by Andre Balazs, Chef Dan Silverman supervises this busy kitchen and a menu which is both trendy and homely at once.

The front bar is packed with hip New Yorkers there to see and be seen - a little too scene-ish for my travel weary bones. However, a quick pre-dinner cocktail helped ease the pain. By day, this room doubles as a more laid back cafe for breakfast and lunch, with big windows, outdoor tables (although, crucially, I noted shorter hours in direct sunlight than Pastis on the next street) and a bright and breezy interior. Worth a try for brunch. 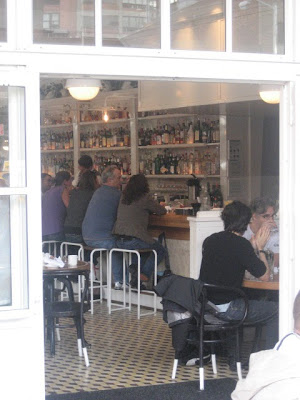 The main dining room is a beautiful, American bistro oozing old school glamour. Dirty martini, anyone? The charisma is enhanced by the vaulted ceilings, checkered tablecloths and plush maroon booths. 480,000 copper pennies tile the floors (apparently - we didn't count). But it's not all "Sex and the City" - The Standard Grill serves up decent quality, hearty bistro fare.

We started with a selection of 1/2 dozen oysters which were lovely, although some better than others (and not a patch on Bentley's in London), washed down with a cheeky prosecco. 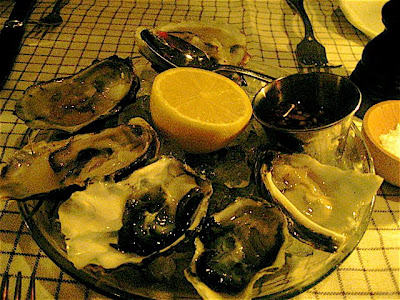 Then the room stood still as our show stopping Million Dollar Chicken sauntered our way, gleaming and glistening, in a caste iron pot. Crispy skin encased juicy flesh - tasty and moreish, although it was probably more impressive on the eye than in the mouth. We still managed to gnaw it down to the bare bones. About $30 between 2 people. 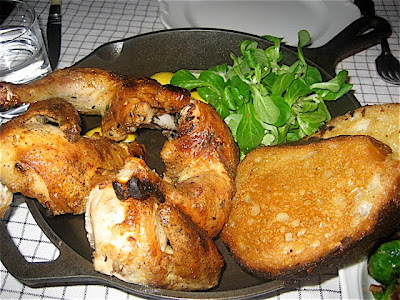 We saddled up the chicken with delicious sides - buttery brussel sprouts with bacon (my new addiction), crispy potatoes with smoked paprika aioli (delicious, and all the better because they were free), and corn pancakes (disappointing - hopes were high given the promising combination of 2 of my favourite words, "corn" and "pankcakes"; but these were almost flavourless). 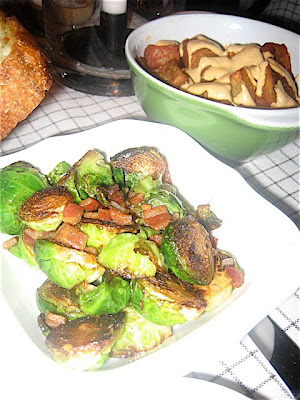 For dessert, we shared a bread and butter pudding - not normally my thing, but so luscious that I happily fought for my fair share in a tense spoon duel with TPG. The pastry chef is Frederick Aquino, formerly of the well known Spice Market so more of the desserts would be worth a shot. 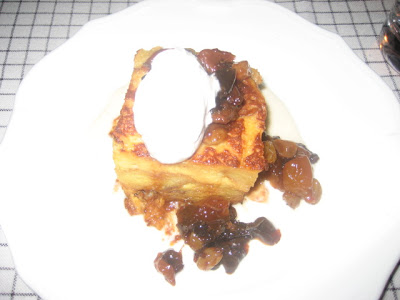 The skinny blondes next to us picked at their salads and pushed a virtually untouched burger around a plate (the burger looked fantastic, by the way, and was almost worth a bony shoulder tap to distract Blonde 2's attention). Worst of all was their accompanying Mimbo who declared he had already eaten, so stuck to his red wine (low cal, presumably) and the odd nibble of lettuce. Most odd (but probably not here). 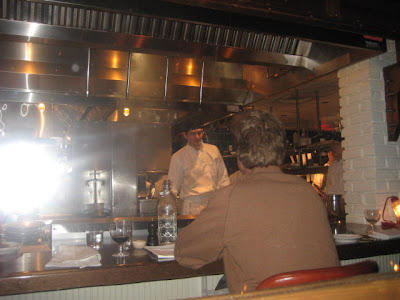 However, for those of us with appetites, this is a great place to eat, with that unmistakable New York buzz. Decent food, great atmosphere.