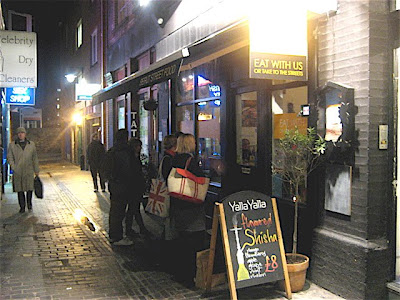 I distinctly recall fretting on Yalla Yalla's behalf when it first opened. In those early days following the birth of a new arrival -  empty chairs, unknown heritage, staff grateful to take my order for a takeaway orange juice - sometimes you just don't know which way it will go. But I thought the room was sweet, they had big, happy yellow signage, the husband and wife team running the place seemed nice, and they had dared to open a few doors down from a sex shop on one side and some kind of Christian gathering place on the other. I live in similar circumstances, so I was gunning for them from the outset.

It seems Yalla Yalla did not need my mental good vibrations.

Within weeks, the place was buzzing with crowds trying out their Lebanese grilled meats, salads and house favourites, like sauteed chicken liver with garlic and pomegranate molasses. My first visit, in the early days (and during my pre-blogger existence), involved a quick solo bite of zesty tabboule with flat bread and a good, garlickey hummos, finished off with a strong Lebanese coffee. I really liked it, and enjoyed the ambience of the tucked away little hideaway where Lebanese cakes and savoury pastries were brimming from the counter. But the memory is sketchy. For reviewing purposes, this will not do at all.

I tried to return a couple of times, but it was always too busy for my last minute nature whimsies. I've since learned the secret - at least if there's only 2 of you, just rock up, wait 10 minutes, and you'll get a seat. We were in.

For some reason, I had to drag TPG there, kicking and screaming. He sometimes gets these ideas in his mind that he's not going to like a place (which, naturally, provides me with a mental guarantee that he will like the place) and refuses like a stubborn mule to budge until bribery, blackmail or desperation take hold. I recently employed all 3 at once, and we arrived safely at Yalla Yalla. 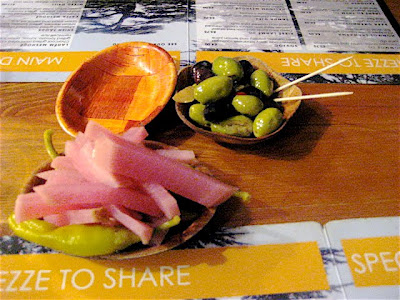 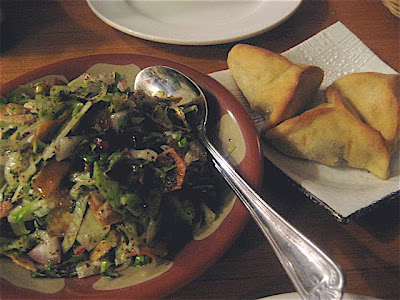 After the standard Yalla Yalla freebie starters of pickles and marinated olives (all rather nice), we shared a decent fatayer spinach (pasty filled with spinach, spring onions, sumac and pine nuts) and the fattoush - a salad of lettuce, tomato, cucumber, spring onion, mint, radish and parsley tossed with crispy pita bread with sumac, red wine, vinegar and olive oil. It was pleasant enough, although I found myself wishing we'd had the fresh and zesty tabboule I remembered from last time. I blame TPG. 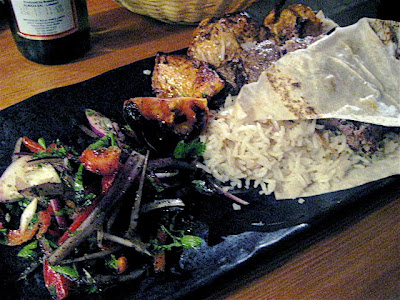 Things stepped up a notch with our mains. I got stuck into a lahem meshouse - charcoal grilled marinated lamb skewers, grilled tomato, sumac onion salad and vermicelli rice.  Oddly, there was also a chicken skewer present. I wondered if it had fallen off someone else's plate but, looking over my shoulder, decided to keep quiet as it was perfectly cooked and delicious. Tasty, tender and smokey, the lamb was also good (I have read other reviews indicating it can be dry at times, but no sign of that on my plate). And is it odd to say I enjoyed the rice at least as much as anything else? (Yep, carb addict). 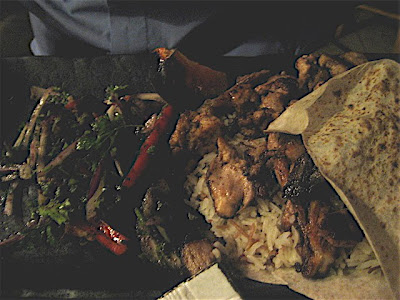 Coupled with our Lebanese beers, we were both completely eating beyond the comfort zone and had no room for the backlava or other tasty looking desserts. I'm determined to head back with my book for a strong coffee and pastries one afternoon.

"Yalla" means "hurry up" in Arabic (just ask me - I'm fluent) and, true to the name, we were in and out the door within just over an hour (it could have been much quicker had we required). We were also less than £15 per head lighter including drinks/service. I was prepared for Yalla Yalla to have been over hyped by now (there were hordes waiting for a seat outside when we left, and midweek lunchtimes are also jam packed) but I was pleasantly surprised. It's an unpretentious, decent little place. I'm not desperate to run back at every possible opportunity, but I'll return at some stage to get a bit more adventurous with the menu, and that moussakaa might just have my name on it.

Best of all, TPG was eating his words. He possibly liked Yalla Yalla even more than I did. Case closed.