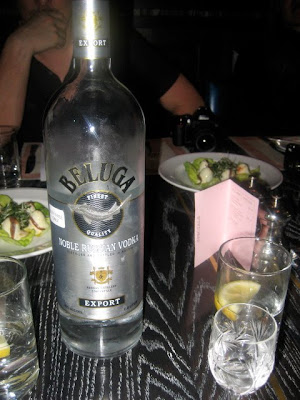 Bob Bob Ricard is fun. Lots of fun. A whole big bucket of jumping castle fun. I will declare my heart on my sleeve from the outset. I love Bob Bob (real name Leonid). I love Ricard (real name Richard). And I love vodka (real name vodka).

Sure, BBR fed me free shots of vodka all night. But, I'm Australian - it takes a lot before the beer goggles (or vodka goggles, as the case may be) take effect on us.

I was not actually expecting to like BBR quite so much. It's glitzy, extravagant and over-the-top in every way - so often a warning flag that there's a bit of style over substance going on. But I managed to bag a place along with a table full of other bloggers to Bob's Vintage Vodka tasting in mid February, so I thought I'd give it a fair shot (pun intentional).

Naturally, this was not your average dining experience - unless you habitually shoot 8 shots of vodka with your meal - and our every whim was entertained by the fabulous owners who dined and drank with us all evening. I haven't yet dined at BBR incognito, but plan to go back based on my positive experience thus far - so this is not a critique of BBR so much as an enthusiastic rant about their fabulous event at which I was a paid for guest. And I must declare another interest - I'm a vodka girl from way back. However, my vodka appreciation has always been more in the nature of late night mindless enthusiasm, often involving a martini glass, so I was interested to hear some of the theory behind the madness.

One does not enter the world of BBR without noticing the interior. It's glammed up, eccentric, flamboyant and quirky, from the gold fittings and green booths, to the marble and leather, and the much spoken of "Press Here for Champagne" buzzers. The intention is to be something of a morning til late "Wolseley style" brasserie. I found it much like stepping into a scene from Alice In Wonderland. This is not a place for cynics, but walk in with an open mind and you might end up enjoying yourself as much as I did.

We kicked off proceedings with the BBR Signature Pink Rhubarb Gin & Tonic, which was lovely and refreshing and intended to sum up the ethos - fun, British and extra pink.

Then the real business began. 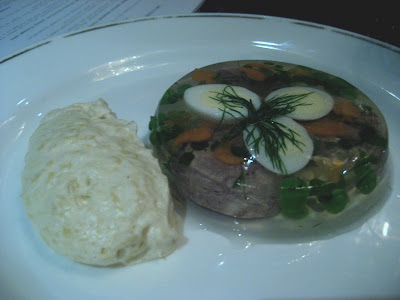 First up, the Vodka Kauffman Special Selected Vintage 2006 (RRP around £70), paired with jellied ox tongue with creamed horseradish. This was my favourite vodka of the night, and one of my favourite courses. The ox tongue was prettily presented and the bite of the horseradish cut through the delicate aspic and meat beautifully.

The Kauffman Special is a wheat vodka made from a single harvest in a vintage year - soft and pure, it's the lack of flavour that makes a good vodka (signalling less impurities and more thorough distillation and filtering, sometimes involving silver or quartz). The less you can taste, the better it is.

This concept is one that's tricky for the hardened wine drinker to get one's head around. Nonetheless, the message was that the vodka clears the palate, warms the soul, and is to be followed by a mouthful-of-food chaser to enhance the food's flavour. It didn't always for me, although it certainly cleansed the palate. In any case, I enjoyed the whole ceremonial aspect of shooting from a small, kitschy vodka glass before tasting my food and I'm seriously contemplating introducing the ritual around the home kitchen table.

Our remaining courses proceeded as follows: 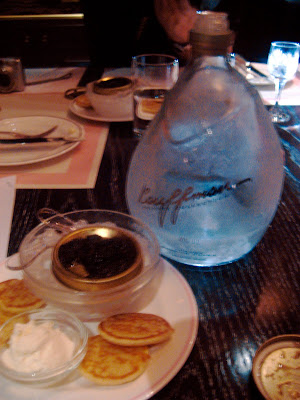 The Vodka Kauffman Private Collection Luxury Vintage 2003 (RRP around £140) served with caviar, blinis and sour cream. My heartfelt love of blinis is no secret. 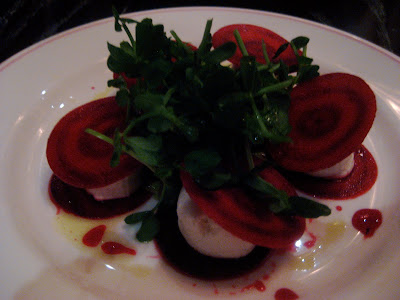 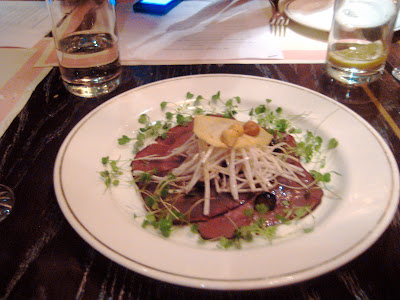 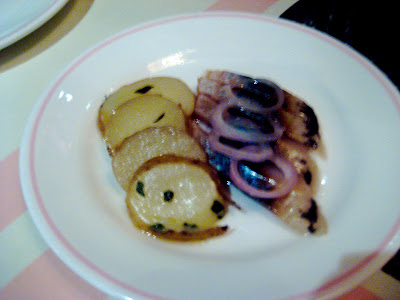 Next was the Russian Standard Vodka (popular in Russia, and retails here for around £15) served with Russian salt-cured herring, raw onion rings and new potatoes. The food was delicious. The vodka tasted like vodka. 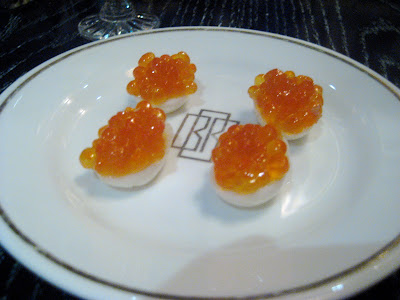 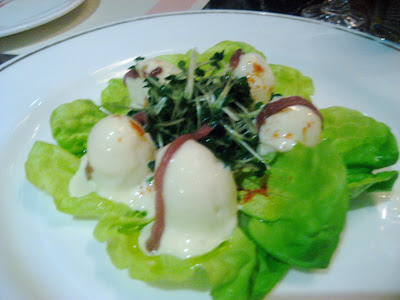 The Beluga (our first malt based vodka for the evening) was paired with quail's egg mayonnaise with anchovies. Again, a surprisingly tasty combo. 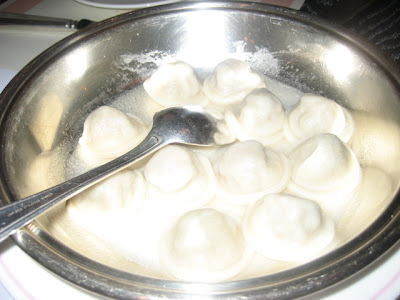 The Vodka Beluga Gold Line (another malt based vodka) was paired with some scrumptiously moreish meat pelmeni (Russian dumplings consisting of pork, beef and chopped onions - delicious with either vinegar or sour cream). 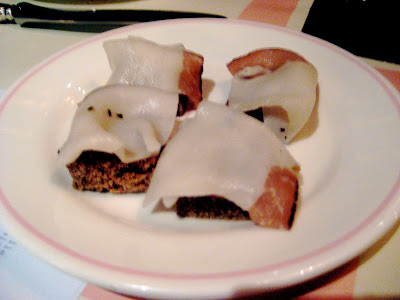 We finished up the tasting with 2 Stolichnaya vodkas - the Vodka Stolichnaya Gold served with salo on rye bread (lard - not my thing, but was rapturously devoured by lard loving Lizzie) and the Vodka Elite served with malosol cucumbers. These were the vodkas with the most impurities, to be scoffed at by enlightened Russian vodka drinkers everywhere. 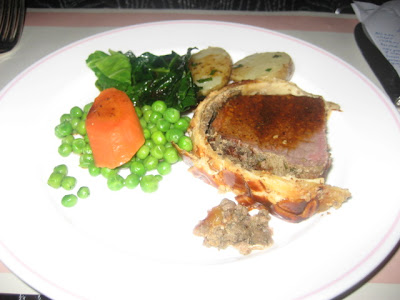 Supper consisted of beef wellington, 28 day aged Aberdeenshire Longhorn Scotch beef with truffle gravy (my least favourite course of the evening, but others were happy to take over the spoils), boiled potatoes, spring greens, peas and carrots. 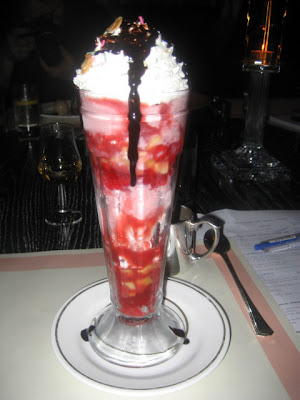 I finished off with a gorgeous Knickerbocker Glory (yes, I'm so sophisticated, but just look at it! Yuh).

For the traditionalist, BBR also serves up wine of course and has a refreshing pricing policy - bottles are marked up by up to a maximum of £50 above the retail price on the most expensive bottles, and in house comparison charts show their prices to compare favourably to other restaurants around town.

BBR is super fun, as I expected it would be. Part mad house, part serious and sophisticated, I also loved the generous and attentive service, the wonderland setting and the food far exceeded my expectations. Thanks to our generous hosts for a fabulous evening and an extensive crash course in vodka - a drink for which I've always held quite the soft spot. Hiccup.

For a review by a fellow blogger who had a more regular/incognito dining experience, London Stuff has summed up the vibe well.