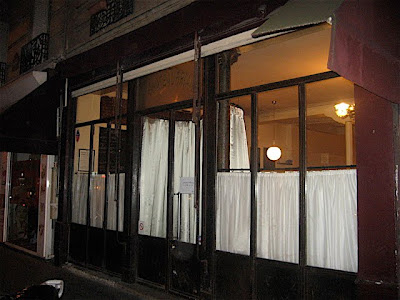 I'm calling it early. Without fear of regret or revision. Set it in stone now. With 10.5 months remaining on the 2010 dining calendar, "Meal of the Year" can be safely declared.

There has been, for some time, much banter about an apparent "crisis" in French cooking and a declining French food culture. However, Le Chateaubriand is rock solid proof that brilliance still flourishes in the kitchens of Paris.

Its non-descript facade, in a part of the 11th arrondissement that I would never otherwise have cause to visit, belies the furtive, bustling, new wave French bistro that is Le Chateaubriand. 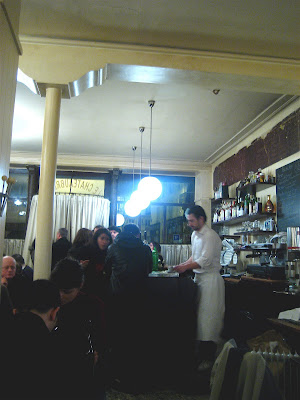 Le Chateaubriand opened in 2006, and is regularly featured in food magazines as one of the hippest eateries in Paris. But this is not what had me excited about visiting it. In fact, its down to earth informality and friendliness overrides any sense that this is a hangout for trendies. Le Chateaubriand provides bistro food which draws on old school French traditions, but with a progressive flair and creativity which reveals an exciting new direction for Parisian bistro culture. It draws on chef Inaki Aizpitarte's Basque roots, but sweeps away the tastebuds on a whirlwind, gastronomic adventure. And it's bloody delicious.

There's a changing set menu each evening of 4 courses for 45 Euros. This must be the best value fine fare in Paris. There's no choice about what you eat - you put yourself in the hands of the kitchen and hope to God they don't serve you osso bucco. (Yes, I know that's Italian and this is France, but why must every set menu - even at fine dining establishments - serve you the fattiest, cheapest cut of meat once they've locked you in at a price which you would not pay if you knew you were getting osso bucco?? Yes, I am looking at you Da Noi and Il Vino [review of the latter coming up.] Anyway, I digress). 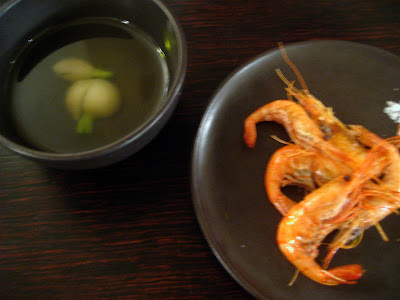 We started with an amuse bouche of tiny, sweet langoustines and baby radishes settled in a bowl over which a fishy, miso like broth was poured at our table. Simple but lovely. An interesting start, but one that hardly hinted at the culinary delights to come. 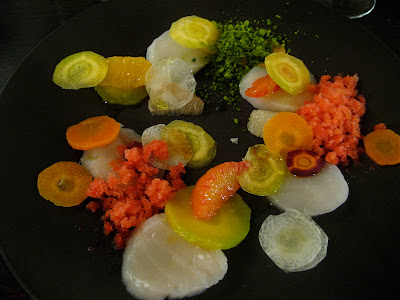 Next came the colourful Saint-Jacques (raw scallops), orange, yellow and white carrots, citrus fruits, crushed pistachios and blood orange sorbet. Such an unusual but gorgeous combination of flavours. Taste sensations were exploding in the mouth at the fresh vibrancy of the citrus and vegetables cutting across the mellow, lush flavour of the scallops. And did I mention the pistachios? Yyyyeeah baby. 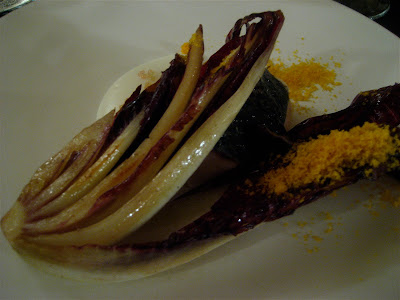 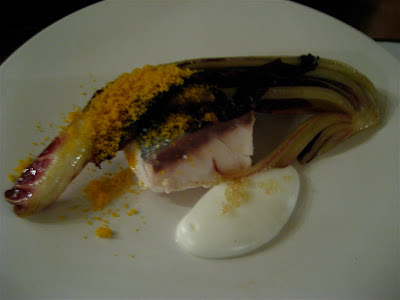 Our sea bass was mouthwatering - succulent, perfectly cooked, and accompanied by an alluring combination of red chicory, and lemon creme fraiche. Worthy of a mug shot from 2 angles. I am in quite a lather. 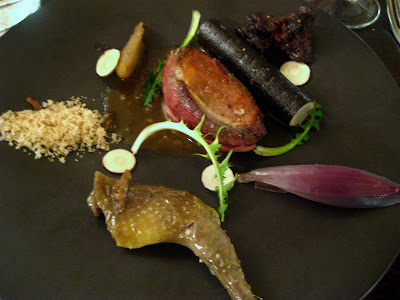 The "Pigeon Paul Renault" apparently claims its name from the pigeon farmer who provided it. Paul Renault, whoever you are, I love you. This little birdie was melt in the mouth good. It came almost rare, with salisify (how in the hell have I never had salsify before? - new addiction to add to the list), crushed hazelnuts and (the only trace I left behind) kidney. By now, I am melting lustfully onto the floor. 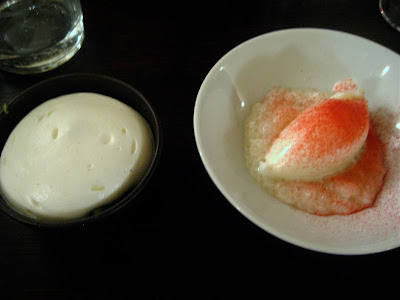 Dessert. A tres important part of any French meal. Ok, so this sounds weird but was utterly marvellous - lychee rice pudding came topped with creme fraiche sprinkled with grated strawberry, and accompanied by a separate dish (yes, 2 desserts!) of pineapple crumble topped with cream. The 2 in 1 dessert notion is to be heartily applauded.

Our accompanying wine and sticky were delicious, and while we went for the bottle, inexpensive carafes are available.

Service was fantastic, particularly in the face of my battling school girl French - those persistent rumours of widespread rude service in Paris has never rung true for me, at least in recent years (and seem quite rich coming from anyone who battles daily with typical London service standards). And they certainly don't apply at Le Chateaubriand.

So there you have it: GD's meal of the year. Given the adventurous and varied combinations adopted, this type of fare may certainly be hit or miss. But, given what I've evidenced of the mind at work here, I trust that there'll be many more hits than misses for me. Bold, classic and contemporary all at once, Le Chateaubriand is one of those places that will likely never get boring - it will certainly have a regular place on the fixture in all my future escapes to Paris. Le Chateaubriand, you have won yourself a loyal friend.