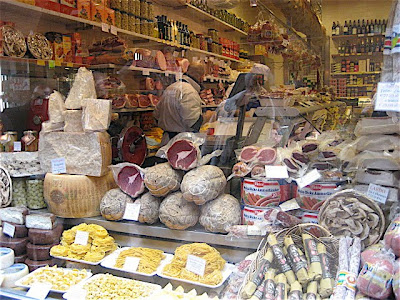 So, we finished up at our newly beloved Zanarini. The Peanut Gallery somehow managed to restrain me from sampling my 2nd bombolone before 10am, and guided me onwards into the bustling streets of Bologna. There's that furtive sense of it being market morning in a food obsessed town.

After some serious fashion/shopping deliberations in a selection of the local boutiques - Will studded black handbag and matching ballet slippers transcribe back in London? (for the record, no). Just how many black, wrap around cardies is too many? And how will TPG try to justify buying another pair of Seinfeld-esque white trainers? - we find our way to the pulsing heart of Bologna's hive of amazing food shops. 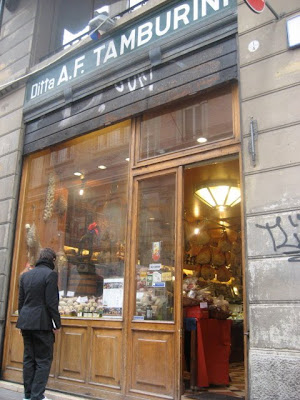 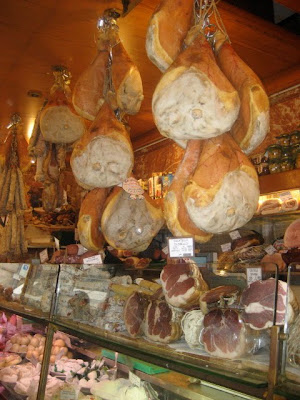 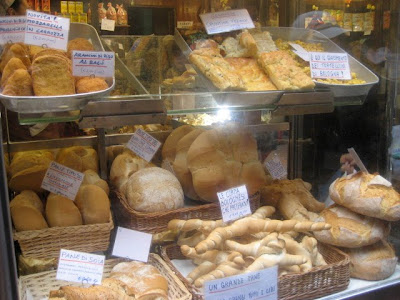 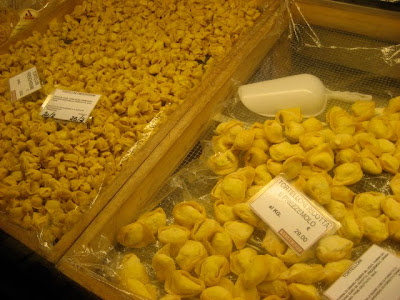 Tamburini (Via Caprarie 1, Bologna - pictured above) seems to be the most famous of them all. We stumble upon it, mouths agape in awe, even before we see the signage indicating its the place we've been looking for. Fresh, handmade pastas - gnocchi, tortellini, ravioli, papardelle - are beautifully displayed in the window (and are made fresh every day), large hams hang seductively from the ceilings, and an army of cheeses stand firmly at attention or ooze alluringly at the counter in turn. There's olive oils and balsamic vinegar (Modena is only half an hour away) and a deli serving up colourful bites to eat in or take away. The delectable smell of cured meats, cheese and sauces mingle and dance through the doorway, drawing us in off the street to browse, pick and scheme about how to get all this stuff home.

Tamburini is said to be a great place to try the local Parmigiano-Reggiano. The displays are beautiful, and there's a deli at the back where you can sit in to sample a quick bite on your travels. You could also try it for an apertivo at night. 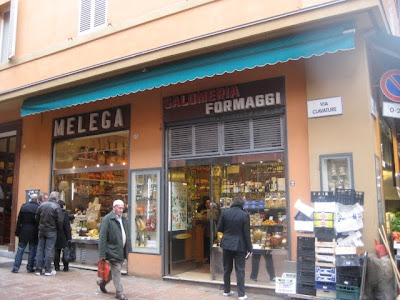 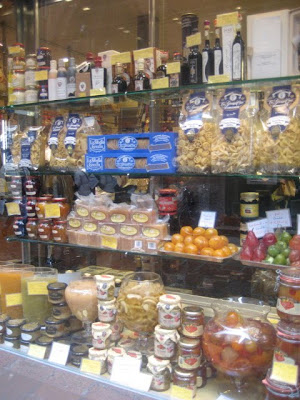 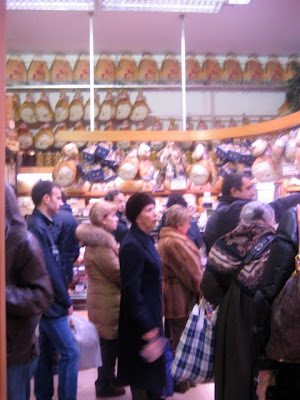 (Simoni)
But there are dozens of places like this (mainly around the cluster of streets surrounding Tamburini). One after the next beckons us in to admire and fawn. One of the coolest would have to be Simoni (pictured above) where locals line up to barter enthusiastically for their daily take of salamis and cheeses. Aside from the glorious delicatessans, this area is a great little hub to watch as the locals barter at stalls for the fruits, vegetables, fish and meats. Other big name gastronomes like Paolo Atti & Figli (via Caprarie, 7 - pictured below) with their beautifully presented pastas, cakes, panettone and breads, are also nearby. 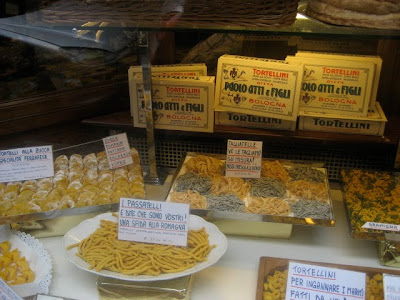 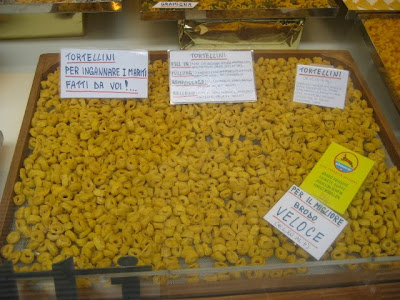 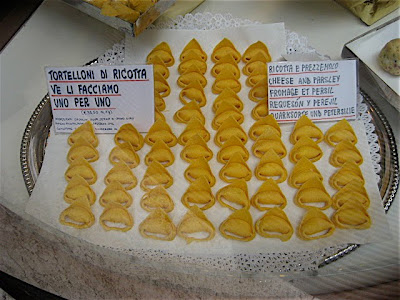 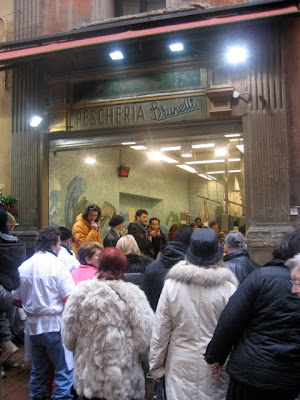 (Locals stocking up on fresh fish) 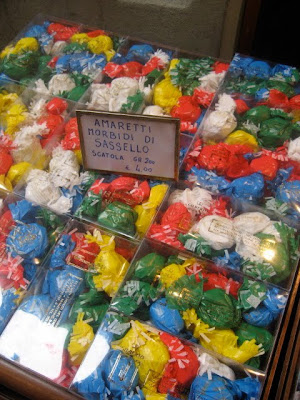 Next door to Simoni is a totally old school horse butcher, doing a quieter trade. But we love its style. 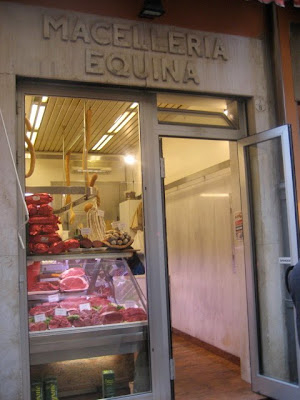 All this window shopping soon gets our appetites going, and we amble our way to secure our place among the well dressed Italians (and American tourists) at an institution of Bologna's dining scene, Ristorante Diana. 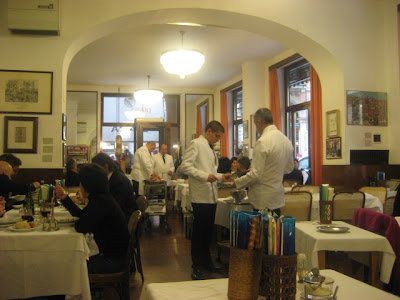 Ristorante Diana is one of the better known restaurants in Bologna. Positioned pertly on the grand Via Dell Indipendenza, a main thoroughfare to the city's hub at the Piazza Maggiore, it is classic, elegant and - as you would expect - more formal than a lunch time trattoria. A fair bit of hairspray has gone to work on the clientele here, women and men alike.

Although there's a family of tourists sitting near us, this is a proper restaurant frequented by local Italians - and although it's not overly expensive, perhaps because of the slight formality, they seem to be those who are either monied up or celebrating special occasions. The plain wooden floor boards, white walls and attractive bright orange curtains lead one to suspect this place is not about to tizzy itself up for the tourists - it's there to serve up unadulterated local classics to a crowd who will understand them. I'm more than willing to give it a burl - especially as it's only a few doors up from our hotel.

Incidentally, on my return to London, I read an interview with Mario Batali (chef at one of my favourite Italian restaurants in New York, Babbo earlier reviewed here) who cites Bologna as his favourite city in Italy (he visits 2 or 3 times a year) and Diana as his favourite restaurant there. If we had known they do a lasagne there "that will bring you to tears", we might just have had to add on an extra course. Next time...

In any case, our own choices do not disappoint. 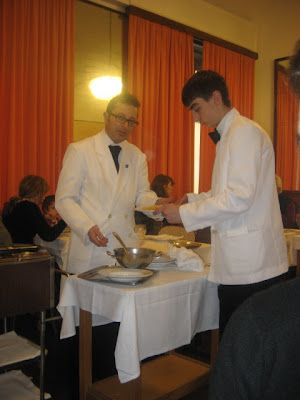 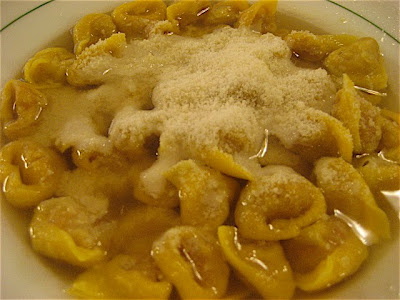 Because we're in Bologna (and when in Rome...) I go for the classic tortellini in brodo - tasty little parcel of veal served up in a light, moreish broth, and topped with a smattering of Parmagiana cheese. Despite the fact the pasta was a little underdone (I love al dente, but there was just a shade too much firmness here), this was one of my favourite and most memorable dishes of the trip. Simple but deliciously comforting. 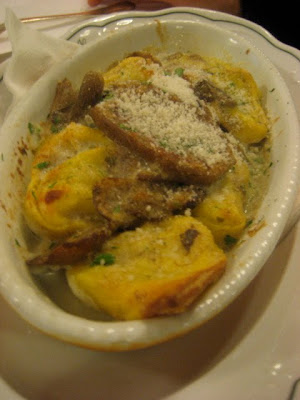 TPG started with the baked tortellini funghi, stuffed with ricotta and spinach. There also seemed to be a fair bit of creamy cheese involved. This one looked better than it tasted - it lacked the flavour of my plainer looking dish and was nothing above an average plate of well cooked pasta. 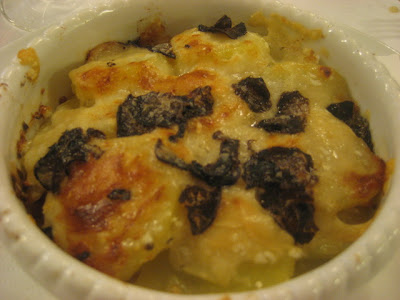 I then moved on to the tortino di patate al tartufo (a potato gratin layered and spliced with rich, aromatic black truffles). Yuh. Small but fiesty, this one packed some punch. I adored it. The truffles were rich and plentiful, and were set off beautifully in the simply cooked potato dish. Despite its small size, it was deeply satisfying, and at 22 Euros I would say this a fair price for the abundance of truffley goodness involved. 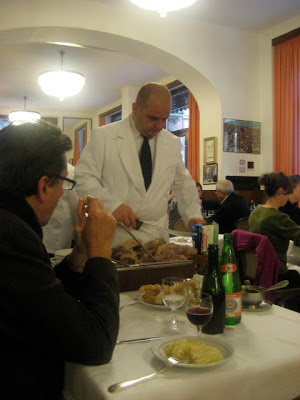 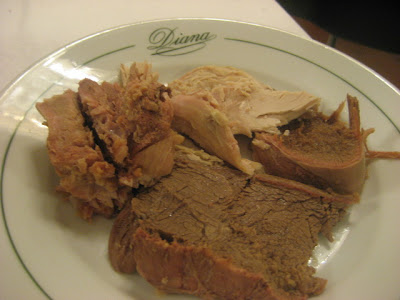 TPG opted for the bolisto misto (boiled meats) - I had a hunch he would as soon as I saw the trolley working the room. A rather burly Italian man - who looks like he's had his fair share of the misto in his time - draws the cart to our table, pulls up a handle and a bounty of meats which have been sitting in broth are revealed. It's loaded with things like tongue, zampone (stuffed trotter), cotechino (pork sausage), guinea ham, chicken and beef. TPG points his way to a generous selection and adds blobs of pickle to his plate.  This choice seems popular with the locals and, apart from a couple of mystery meats, TPG is generally happy with it - and occasionally tries to help himself to my truffley potato bake which I guard fiercely.

We wash it all down with a bottle of Dolcetto D'Alba from nearby Piedmont. And we consequently find ourselves rather drunk by 3pm on our first day in Bologna. 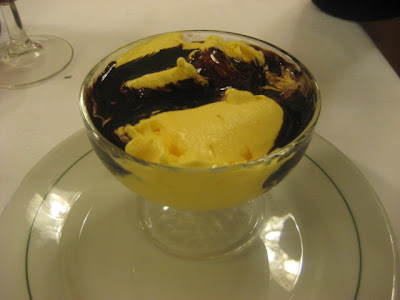 We semi sober up over a vanilla gelato with chocolate sauce which we choose solely because everyone else in the room is choosing it so it must be good. It is. Delicious.

There are 2 reasons we might not go back to Diana next time. First, because there are so many great places to eat here, which are probably less likely to be found on the tourist trail. A place would need to be truly outstanding to warrant a second visit on our next trip. Second, the service - grumpy and stiff, and quite happy to ignore us at times in favour of the local, repeat business, these guys were at complete odds with the rest of the friendly, laid back population. But we were so drunk on wine and a hearty lunch, we did not feel inclined to take it too much to heart.

Our meal came to around 50 Euro per head including wine and service. 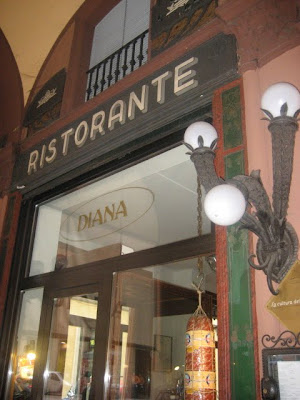 We made our booking once we arrived in Bologna and wandered past Diana which was near our hotel, however it was earlier discovered by Helen of World Foodie Guide who reviews it here.

We rolled home to our hotel room to lie flat out for a while in preparation for a much anticipated evening of apertivo and celebratory feasting with our local friends, Alessio and Raffaella. They would take us off the (hardly) beaten track and into their world of delectable Bolognese delights. Yes, you've guessed it - I'm (rather annoyingly) keeping the best 'til last.....

You click here for Part 1 of my Bologna investigations, including Espresso and a bombolone breakfast at Zanarini, and Part 3 Meeting up with the locals at Trattoria Gianni, followed by an endless course seafood lunch in Modena.
Posted by Greedy Diva