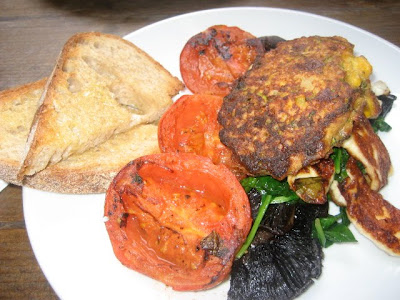 At 10am on Saturday morning, I find myself lying belly up on a purple yoga matt pondering (1) what on earth the strange smell is, (2) why the man next to me is emitting whale noises, and (3) how long it will be before I vomit, pass out or run screaming from the room in a frantic panic attack.
"You must not leave the room for 90 minutes" warns the merciless Bikram yoga Lieutenant Colonel through a hazy 41 degree Celsius fog of B.O., visibly steaming body heat and dripping with sweat underarm hair. As I concentrate on the overwhelming task of breathing, she suggests that I and Libby, my fellow Bikram boot camper, wave to the room to earmark ourselves as the only Bikram first timers, presumably for the sole purpose of letting the others know which ones to watch between downward dogs for entertainment purposes.
I emerge 90 minutes and a confronting communal shower later, relieved of 30 kilos of body fluid, with a traffic light red face, poodle hair frizz and a mildly startled/manic gaze, all of which suggests to Libby she best get me quickly to the nearest source of food. Lantana Cafe beckons.
Behind Lantana Cafe is the story of a woman from Melbourne on a serious mission: to show the London public that breakfast can offer more than "the full English" or eggs florentine, washed down with a mug of workman's tea.
As reported in the February 2010 edition of Olive magazine, Sheelagh Ryan quit her job as a policy advisor to an Australian minister, took on waitressing jobs for free on weekends in Melbourne cafes to learn the ropes while waiting for her visa to clear, and eventually found the site in Charlotte Place that now stands home to one of the most popular cafes in London. The La Marzocca espresso machine was promptly installed, and an Australian style brunch menu was put into action. And so it was that Lantana Cafe won Time Out's award for Best New Cafe 2009.
Like for all caffeine oriented antipodeans, for me the key to a treasured breakfast haunt is the coffee. I'll go out for a morning coffee then go home to make my own breakfast if I must. Lantana's flat whites rate up there with the best of London's (select few) great coffee shops. What differentiates Lantana from all of them (except perhaps The Providores in Marylebone, the enterprise of 2 New Zealanders) is its typically antipodean style, hearty brunch menu.
I can never go past the grilled haloumi, mushroom, sauteed spinach, corn fritter (slightly charred on this occasion), roasted tomato with chunky, wholemeal sourdough toast. The haloumi is never rubbery or tasteless at Lantana.

I dined here on Saturday with Libby and Moira who sampled the alluringly runny poached eggs on sourdough. 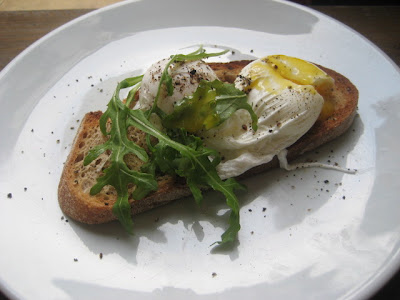 Also popular are the corn fritters, and the baked eggs with chorizo, mushrooms, spinach and spicy tomato sauce served with grilled flatbread and creme fraiche.

Or you can keep it simple with toasted sourdough (with Vegemite - hallelujah) or toasted banana bread with date and pecan butter.

The only downsides - (1) the hideously long Saturday brunch queue, (2) it's not open on Sundays (when the manager indulges her own passion to sample a restful coffee at other spots around town) and (3) the crowd is, by Lantana's own "off the cuff" estimates, 90% Australian (like me, but I'm 100% Australian). Oh, and (4) Lily Allen was apparently there on Saturday.

The good news is that the owners are opening another cafe at a new site in Great Portland Street, Fitzrovia soon. [GD: Aaah, correction. Shelagh has confirmed this GD "inside scoop" is nothing but a scandalous rumour.] Enjoy. Just save some haloumi for me.