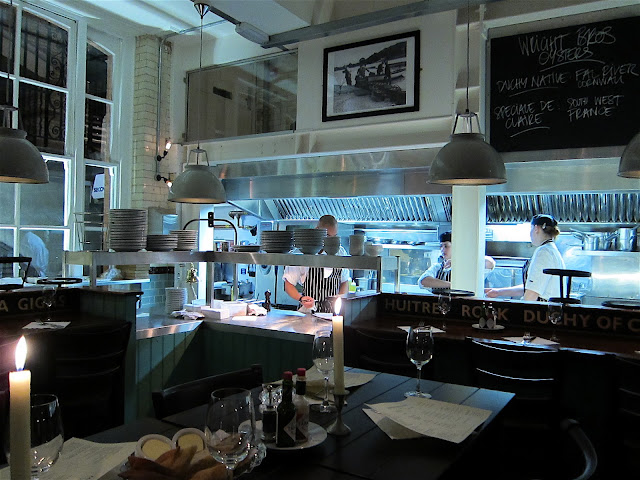 The new Wright Brothers Soho is certainly a fun place to gather the troops, or dine solo, for seafood binges large and small.

Our Sunday night party of 6 gathered in the downstairs bar to share some champagne and oysters. I love the fit out of the bar area - high table seating, white tiles and exposed brickwork, industrial fittings, high ceilings and an open kitchen set the scene for a potentially buzzing area once the crowds start flocking in. It would also be the perfect place to eat alone at the bar while watching your oysters being shucked.

Most of the searfood is sourced from Small Cornish day boats and is fresh and from sustainable stocks. The shellfish hails from Wright Brothers' own Duchy Oyster Farm on the Helford River in Cornwall, or other parts of Britain and France. 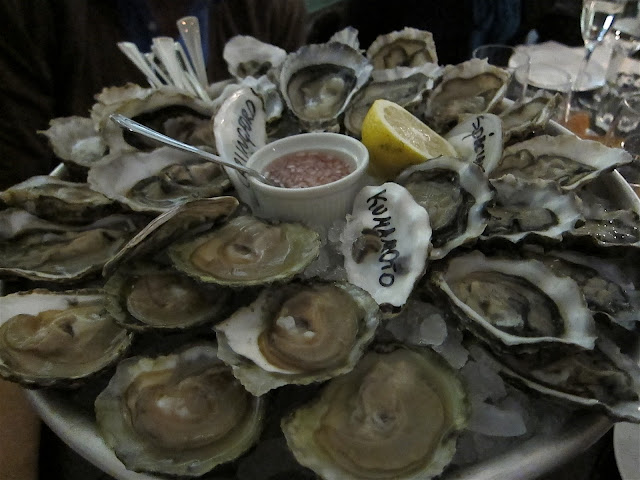 Mmm... oysters - the ultimate creamy, salty taste of luxury. We ordered 2 dozen - a mixture of everything including the special Japanese Kumamotos, Carlingfords, Duchy Natives, Colchesters, Speciales de Claire and Maldons. All were good, but I particularly liked the buttery Carlingfords and the small, briny Kumamotos.

Deep-fried whitebait with tartare sauce were slightly overseasoned but the delicate, crisp batter gave way to fresh, steamy moist flesh. Tiny Falmouth Bay prawns in garlic and butter are sweetly addictive and a large slab of toast lathered in a generous serving of fresh crab was also lovely and big in flavour.

Service was friendly but a little slow - I had the feeling they didn't want to disturb our conversation which meant we found it difficult to get the food coming. But, it's still early days.

Prices range from around £6-7 pounds for 3 oysters and the small tasting plates are generally around £4-9 each. Larger dishes like fish pie (£14.50) and ox cheek, ale and oyster pie (£18.50) are there for more substantive bites. I say it's very reasonably priced.

The dessert menu is also appealing (including lemon sorbet from Gelupo, chocolate pot and hazlenuts or Neals Yard cheese). However, we outstayed the bar's shorter opening hours on Sunday (I think it closed at about 11pm), so we hit Bar Italia (it's been years, YEARS!) for panettone and fab hot chocolates. 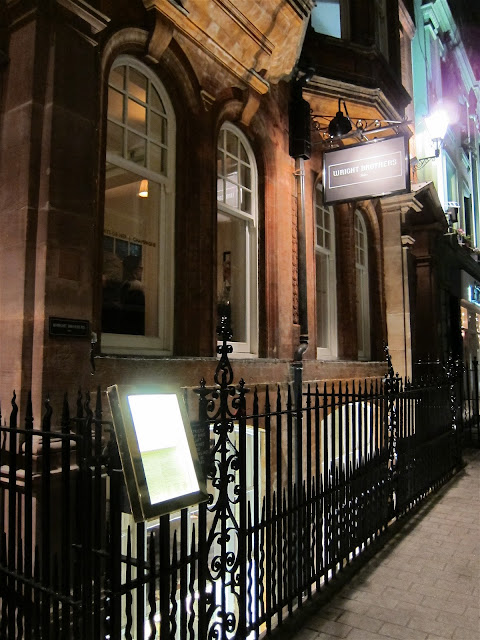 The upstairs restaurant at Wright Brothers Soho is also gorgeous - a slightly more romantic setting with candlelight and large windows overlooking Kingly Street. I already liked the original Borough branch, and now the Soho venue is a place to which I'll definitely be returning on a regular basis - for a more substantial meal next time, and then again when the need for reasonably priced oysters and bubbly after a hard days shopping takes hold.