The new Hawksmoor, Seven Dials in Covent Garden is a shiny, brassy counterpart to its more pared back Shoreditch mothership.

Located in the old Watney-Combe brewery, the front bar is dark, stylish and sophisticated. This is essentially a steak house (and a mighty fine one - I'll get to that later). But in the domain of proven bar man extraordinaire, Shaky Pete (who has moved over from the Shoreditch branch), we sip well made marmalade cocktails in martini glasses (£7.50) and some excellent lagers while making the most of Hawksmoor's superb bar menu.

I've sung the praises of the extraordinary Hawksmoor burger before, its juicy, loosely packed meat laden with fatty marrow to give it extra richness. Rob orders it here and gives it the thumbs up - it looks every bit as good as those I've had at Shoreditch. Now, there's also a choice of the Burger Van Burger (a stripped down version of the classic Hawksmoor burger) or the Kimchi burger. For something different, I go for the latter and it's certainly an eyeful. The meat is fantastic (no surprise there), and it's huge. However, I'm not a massive fan of the kimchi (a Korean dish of fermented cabbage and spices). Rich and tangy, it's nice enough on its own - but I find it quite overpowering with the burger. If I'd never met the original Hawksmoor burger, I would be writing home about this one now - it's good. But we've met, I'm smitten and so it's the original burger all the way for me.
The burgers come with a choice of thick, crunchy beef dripping chips (my choice - they're fantastic), triple cooked chips (both sorts of chips come with a gorgeous Stilton hollandaise) or a refreshing green salad. The latter may not sound as sexy but is terrific as far as greenery goes. (Burger and chips/salad is £15 - but, oh, it's worth it).


TPG's lobster roll is a fine thing - generous pieces of sweet lobster are heaped into a long, warm, toasted brioche bun with garlic, hazelnut butter and mayo. Apparently, it's stuffed with a whole Dorset Blue. Strangely, there's a side of bearnaise which is excellent in its own right but I'm not sure what it's doing there with a lobster roll. The clincher is this baby is quite small for £25 and doesn't come with the side of chips or salad. In New York this week, I ate the lobster roll of my life (at Luke's Lobster, East Village), made with huge chunks of fresh lobster from a sustainable source in Maine - it cost me $14 (£8.73, review to follow). It may not be fair to make direct comparisons of two such different operations in entirely different continents, but it has to be said that the Hawksmoor lobster roll is hair raisingly expensive.
But that's pretty much where my quibbles with anything about the Hawksmoor end.

I also ate in the larger dining room during the soft opening period. Exposed brickwork and dark pillars give an industrial edge to the sleek room, which is perfectly conducive to the task at hand - consuming large quantities of tremendously good steak.

All steaks are from Yorkshire Longhorns reared by The Ginger Pig and dry aged for at least 35 days. 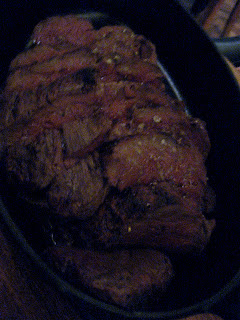 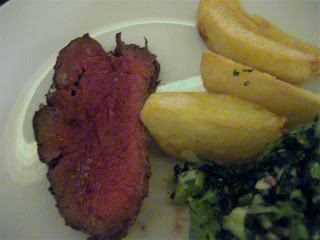 My preferred cut is the fatty bone-in prime rib (£6/100g), although they're out of that and the rib eye (400g, £25) by the time we order on the first night of the popular soft opening period. Our lovely waiter arranges for us to have a large chateaubriand for the same price (normally £12/100g). It's quite easily the tastiest chateaubriand I can remember, the dry ageing giving a great depth of meaty flavour. It's gorgeously tender and cooked to perfection on the Josper charcoal grill. There's a satisfying charred crust while the middle is lusciously pink and juicy. The delectable bone marrow gravy is our sauce of choice and we don't regret it.
We share the excellent, crisp and fluffy beef dripping chips and a serve of creamed spinach (£4 each). TPG is tempted by the macaroni cheese, but we save it for next time.
And now I have an admission to make. Before our ginormous steak, we also ate a serve of lamb chops. And it certainly taught me a lesson - just because you're out for steak, do NOT ignore the chops. They're grilled with a mint and caper salad which adds salty, zingy flavours to the deep, juicy meat (£10). Sublime. We also enjoyed the excellent prawn cocktail (£8.50). 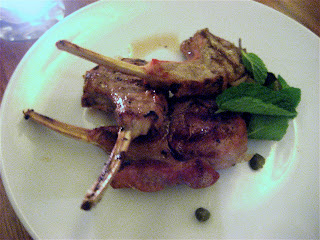 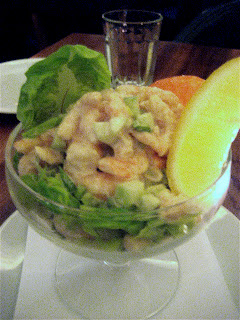 In the end, it's really hard to choose between dishes - so much appeals.
The mini sticky toffee sundae (£4) is delicious with gloopy bits in the sauce at the bottom, although TPG's custard tart is a little bland (£6) - we regret not opting for the sticky toffee pudding which comes highly recommended.

Your bill at the Hawksmoor will stack up - it's not cheap. Dinner for 2 with drinks is likely to cost around £100 (plus service). However, it's a joyous place to indulge in great quality meat with some classy cocktails on the side. If you haven't been already, add it to your list.