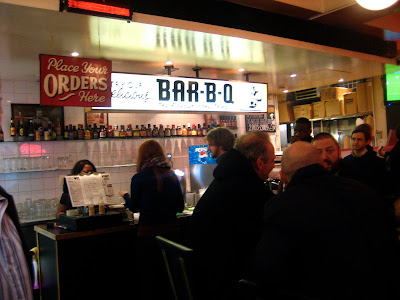 If it's big meaty portions of chin wiping, greasy fingers glory you’re after, Bodean’s is not a bad option. It’s probably not Texas, but it might be the most convenient way to imagine you’re chowing through a good ol’ Texan BBQ in the heart of London.

We’ve been a number of times now, always at the desperate behest of The Peanut Gallery, when he needs his fill of American, cowboy hat wearing, testosterone filled, beer swilling, gut thumping stuff. Or when he wants to watch the football on the big screens. 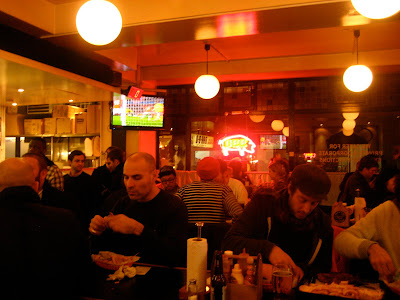 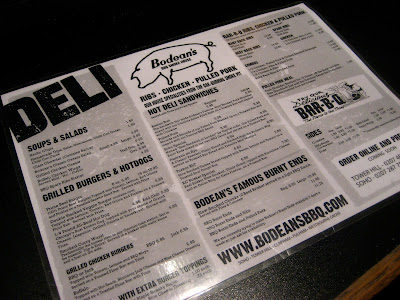 I always go for one of the gigantic hot deli sandwiches (in hamburger buns) – usually the Pulled Pork as pictured (£5.25) with mounds of juicy pulled pork piled on a toasted bun, topped with BBQ sauce. There are also sandwiches with pastrami, burnt ends, brisket, coleslaw, slow cooked pork shoulder, or combinations of the above. The fries are good too. 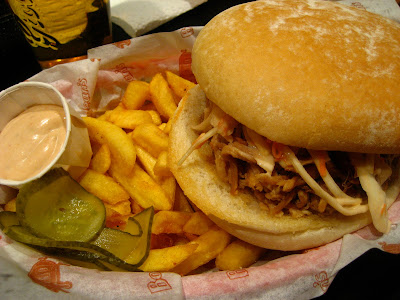 TPG recently tried the beef hot dog (£4.95) – just like any junky-in-a-good-way hot dog to me, although he (being more of a hot dog man) seemed pretty happy with it (although it's not in the same league as Shake Shack's in New York). This was, of course, just a “side dish” to his BBQ chicken burger (£6.95). I consider it mandatory that all this be washed down with the beer on tap. Preferably while beating your chest and shouting at the big screen. 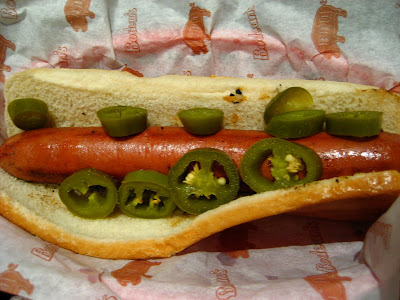 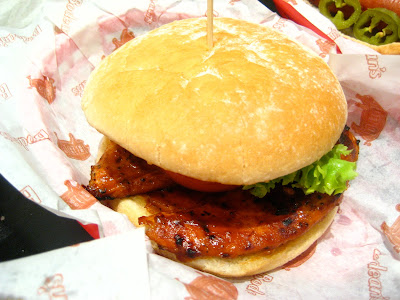 The pulled pork and ribs are the signature dishes. The ribs are enormous. Even the salads are heart attack inducing.

I also love the ample trays of USA condiments on offer – condiments make us happy.

You’ve probably been already (there’s quite a few branches – we go to the Soho one). If not, for decent quality cow or pig, when you don’t want to spend your weekly food budget on some of the limited places in London cooking top notch meat, I think it’s a decent goer. If you know a better place for American style barbecue, centrally located, I'd love to hear about it - I'll pass it on to The Peanut Gallery as his birthday present.

If you're prepared to pay extra for some of the best pieces of meat in London, go to Hawksmoor or Goodman - but you won't be able to watch the football and howl at the moon while you eat it.