Teanamu: Tea appreciation and zen in Notting Hill - Who knew tea could be so fascinating to a die hard coffee lover? 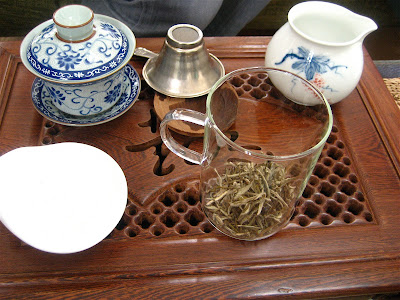 If I learned 1 thing at the Teanamu tea appreciation workshop last weekend, it's that I should probably throw out the entirety of my existing stash of tea and start again.

Tea should, apparently, be drunk in the same year that it's harvested. And while the vintage 1998 ripened Emperor Pu Erh tea I sipped at Teanamu last week was quite divine, I'm not sure my old Earl Grey bags which have been gathering dust behind a crusty jar of Nescafe are going to qualify as "vintage".

So who knew there was so much fascinating stuff to know about tea?

Well, the delightful Pei of Teanamu for one. He treated me to a tea appreciation workshop at his premises in the leafy streets of Notting Hill last weekend. 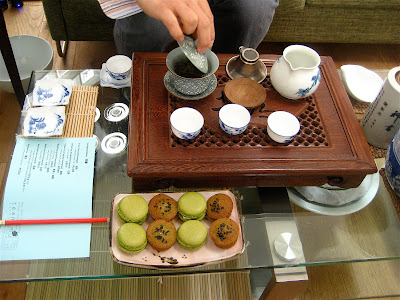 Tea properly means beverages made from the Camellia sinensis plant, which is native to South East Asia. (Roobos "tea" is not made from this plant and so isn't really a tea, afterall. Imposter!)

Green, white, oolong and black teas all originate from this plant - the difference is the sliding scale of oxidation from green (unoxidised) to black (oxidised), which depends on how they are picked and stored prior to ending up in your cup. In between, white is the easiest to make since its partly oxidised. So, that's why we hear about the potential health benefits of green and (now) white teas which are high in anti-oxidants. All types of tea contain loads of healthy nutrients.

Generally, tea has a higher caffeine content per gram than coffee, but you need less of it per cuppa. To counteract the caffeine, which is rocketted into your bloodstream when you sip your espresso, tea contains another chemical, theofylline, which acts as a relaxant - keeping you chilled like a Buddist monk as the caffeine calmly works its way into your system. It's no surprise then that tea, and tea ceremonies, are a central part of many Eastern religions. 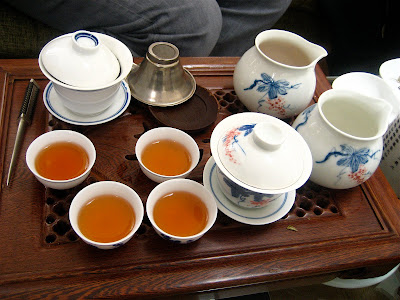 The rituals of Chinese tea drinking are quite different to those of the British and Japanese. While the latter brew their tea in big pots, the Chinese use small porcelain pots and tiny shot sized cups to keep the tea at a stable strength and temperature. Porcelain pots and lower temperatures (70-80 degrees - listen to the kettle, or look out for when the bubbles look like "crab eyes" - or, go on then, be boring and use a thermometer) are used for unoxidised teas which are delicate - so green and white teas. Small traditional clay tea pots are used for oxidised, or black teas, requiring hot, boiled water since a good quality clay pot will retain the hot temperatures. Don't even think about treating them all the same way.

If you're as serious as Pei, you'll even buy pure water from the healthfood shop and you certainly won't boil London tap water over and over, increasing the minerality. What were you thinking??

Pei scouts around China, climbing mountains and traipsing through fields, to find reliable sources of top notch tea. He also has trusted suppliers in Japan, and he assures me that most of the stuff you buy in Chinatown would not stand up to the discerning palate of the tea connoisseur. The tea you see in most shops contains only chopped up bits of leaves. In contrast, Pei's tea contains the whole bud and is cut further down the stem past the top leaf shoots. This is better for maintaining nutrients and taste. Pei compared green tea to asparagus (we're back on to food to bring things back to my level) - you should break the tea leaf where it breaks naturally; the lower bits get disgarded for cheaper tea. The test of good tea is that the taste should not disappear too quickly - you should experience the whole taste down the back of your mouth. 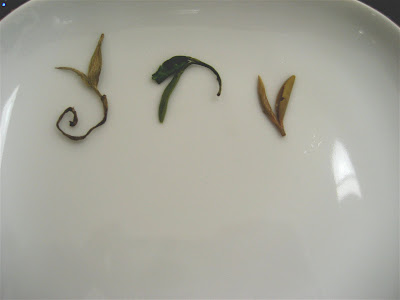 Our tasting session contained many teapot downing sessions of interesting tea facts and cultural and historical lessons about tea. But best of all, you get to taste them over Pei's delicious, home cooked yuzu macarons and green tea madeleines. (He even conducts classes about cooking with tea, in a kitchen so big and shiny, mine is currently blushing.) 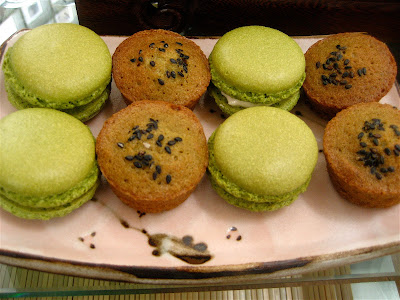 Among the ten types of gourmet tea we sampled, were the Silver Needle (a tannic white tea), Maofeng green tea (with a sweet corn quality), Lychee black tea (best drunk from a traditional clay pot - although my ears pricked up hearing it can also be used with success to flavour vodka), a Meng Ding Huang Ya yellow tea (difficult to buy, with an unusual fermented flavour), the Silky Oolong (a half fermented oolong with a creamy, citrussy flavour) and a the Big Snow Mountain Pu Erh 2010 (raw, red tea - to which I attributed a big, fat smoky bacon punch). 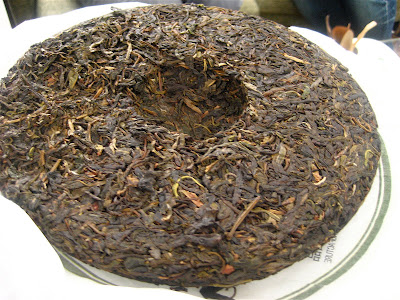 The Phoenix Eye Jasmine is a hand rolled, white jasmine tea scented with flowers over 7 nights. Cheaper scented teas (or cheaper teas with bergamot) are flavoured with oils. True tea connoisseurs apparently look down their noses a bit at these scented teas as being in the lowly ranks - yes, there's even a class system among tea, apparently. I like to think of it as comparing Cadbury Milk Tray to, say, a Pierre Herme ganache. Each has a place in my heart.
The tasting class lasted for around 2.5 hours, but Pei is so passionate and unhurried that I'm sure he would happily sit down and sip away with you for as long as you wanted to indulge your passion for tea talk. His tea appreciation classes cost £35 and will introduce you to a whole new world of calming tea zen. He's hosting a Spring Tea Open House at Teanamu on 22 May from 12-4pm, and Pei also plans to open a cafe at the current premises where you can sip teas the Chinese way and eat delicious pastries and Japanese snacks - all the while Pei will be on hand to talk you through the ropes as you like.

Pei's teas are prices at around £4.50 - £6 for 20-30 grams, and many are harvested from trees which are over 200 years old. Some some are taken from trees which are over 2000 years old on Big Snow Mountain - Pei trekked up there himself. The workshops are eye opening, and have certainly inspired me to think more about tea. Who knows, I might even forgo the occasional cup of coffee - although I'm not sure how the whole tea ceremony thing is going to go down at the office.

Teanamu, The Coach House, 14 A St Luke's Road, London, W11 1DP (but see the website for directions as it's tricky - the entrance is on Lancaster Road)

I attended the Teanamu Tea Appreciation workshop as a guest of Teanamu with The Wine Sleuth and The London Foodie.
Posted by Greedy Diva